Monty: Tiger Should Have Retired At St. Andrews 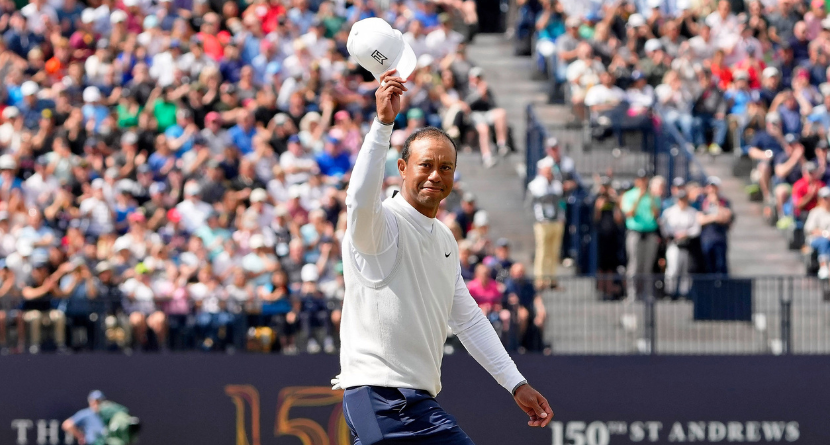 For a lot of great players, knowing when to walk away is one of the hardest decisions they will face.

As it pertains to Tiger Woods, some people feel as if that time has already come and passed.

After suffering a horrific car accident in 2020, Woods was able to return and play this past season at The Masters, The PGA Championship and the Open Championship at St. Andrews.


According to Colin Montgomerie, the iconic 150th Open Championship at St. Andrews should have been his final go at it.

“That was the time,” Montgomerie said on The bunkered Podcast. “Stand on that bridge (to the 18th hole), start waving, and everyone goes, ‘So, is that it?’ Yeah, it is. It would have been a glorious way to go.

“The stands were full, the world’s TV cameras—from all continents—were on him, he’s walking up there on his own, tears were in his eyes obviously You can’t beat that walk. I’ve done it myself. When the stands are full, you cannot beat that walk.”

“It would have been a glorious way to go.”

Colin Montgomerie reckons Tiger Woods should have retired at The 150th Open this summer.

Montgomerie feels this way because he does not feel Tiger is competitive anymore.

“I can’t see that happening,” Montgomerie said about Tiger winning again. “I’d love it to happen because it’s great for the game. I would love him to win. But I just can’t see it happening.”

Tiger missed the cut at St. Andrews. He made the cut at the Master’s and PGA, but struggled to finish at Augusta and withdrew after the third round at Southern Hills.

Prior to Monty’s podcast appearance, Woods was asked about his future schedule at the Hero World Challenge earlier this month.

“The goal is to play just the major championships and maybe one or two more. That’s it,” he said. “Physically, that’s all I can do. I told you that, guys, you know, the beginning of this year, too. I mean, I don’t have much left in this leg, so gear up for the biggest ones and hopefully, you know, lightning catches in a bottle and I’m up there in contention with a chance to win and hopefully I remember how to do that.”

Tiger Woods breaks down his plans for next season and how much he plans on playing. pic.twitter.com/ZpWvDQOCJU

Golf fans do not want to see Tiger gone for good but walking him just struggle to walk does bear the question. It will be interesting this season if he is able to be more competitive at the major tournaments.

Wagner is coming off a great season, finishing 31st on the money list. She closed the season with five top-35 finishes, including a pair of top 10s to play her way into this year’s Q-Series.