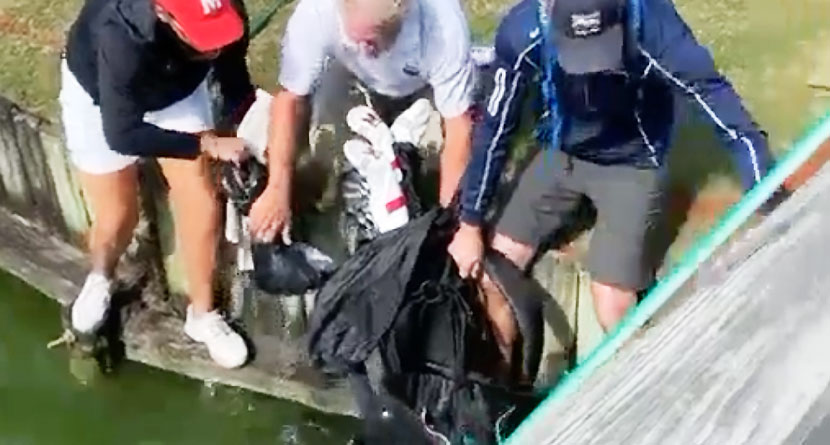 The differences between tournament golf and recreational golf are extolled on our televisions each and every week, but one thing both have in common is that it’s pretty hard to play either while your golf clubs sink to the bottom of a water hazard.

Maryland freshman Karla Elena Vázquez Setzer was playing the first round of the final fall tournament for the Lady Terrapins on Oct. 29 at the Dye Course at the Country Club of Landfall in Wilmington, NC when she stuffed a tee shot to 10 feet on the par-3 second hole, her 11th of the day.

The shot was good by any measure, but considering the winds were gusting around the course at 35 MPH and the green was surrounded by water on three sides, it was even more impressive.

What would happen next, however, was not ideal.

Vázquez Setzer missed the birdie putt, tapped in for par and turned to replace her putter in her bag, which was loaded onto a push cart only to see it hurdling towards the water hazard. Some quick-thinking volunteers grabbed a few nearby bunker rakes and hooked the wheels of the cart before it fully sunk.

At 2-over par through 10 holes in windy conditions, Vázquez Setzer was a score that Maryland would have been planning on counting, so head coach Kelly Hovland’s first thought was that they need to get some clubs out of the water so the freshman could play the final seven holes.

Instead, as luck would have it, the volunteer’s rake job was enough to salvage the push cart and bag with only a 9-iron and cell phone missing once it was pulled up. Hovland said she was immediately impressed by Vázquez Setzer’s headspace in the aftermath saying she could work around not having a 9-iron and her phone was replaceable.

“She’s an international kid,” Hovland told Golfweek.com’s Beth Ann Nichols. “That phone is a big connection to her family and social life.”

Sans 9-iron, phone and range finder — it was ruined by the water damage — all Vázquez Setzer did was birdie two of the next three holes and three of the last seven to play her back nine in 1-under par and post an even-par round of 72, the best first round for Maryland by four strokes, and sit in a tie for 12th through 18 holes.

“One of the tenets of my coaching philosophy is mental and emotional resilience,” said Hovland. “That’s something I talk about all day long.”

The Maryland team motto this year is “Own the response.”

Vázquez Setzer did just that.