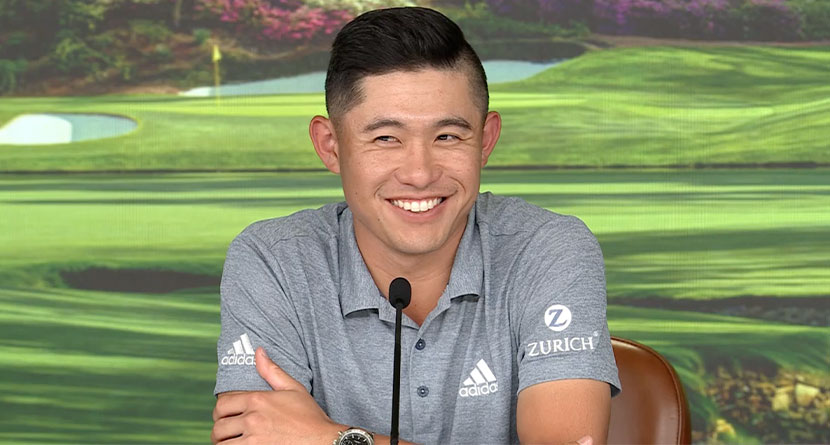 If there’s one press room in professional golf that should be a safe haven, it’s the massive media center at Augusta National Golf Club.

After all, unless you’re the chairman, anything that can be considered as even approaching the line — much less cross it — will result in a press credential getting pulled faster than you can say “pimento cheese.”

That’s why the line of questioning that met two-time major champion Collin Morikawa was so puzzling. Having answered questions for some 12 minutes, a journalist was called upon and began by relating to Morikawa’s hometown and making mention of the journalist’s sons attending the same college as Morikawa.

Unusual, sure, but not the craziest thing Morikawa had been asked. However, it only spiraled from there.

How the hell did this guy get through the pearly gates pic.twitter.com/VIQibpOTAF

Morikawa answered the first rambling question like a pro, relaying some feelings he had during a poor final round at December’s Hero World Challenge, but the journalist wasn’t done. He got into Morikawa’s personal life and how marriage affects professional golfers.

“My friend said, boys want to get married, their games start get rusty. Ladies, when they get married, they win majors,” the journalist said. “Do you worry about that? Or it was a bad question; you prefer not to answer?”

this was a quite weird and uncomfortable back-and-forth with Collin Morikawa pic.twitter.com/bQasWxcprU

Morikawa was flummoxed, looking around seemingly wondering if everyone was in on a joke he wasn’t aware was taking place.

Smiling and laughing it off, Morikawa answered questions for another eight minutes before heading back to the true safe haven at Augusta National: the golf course.