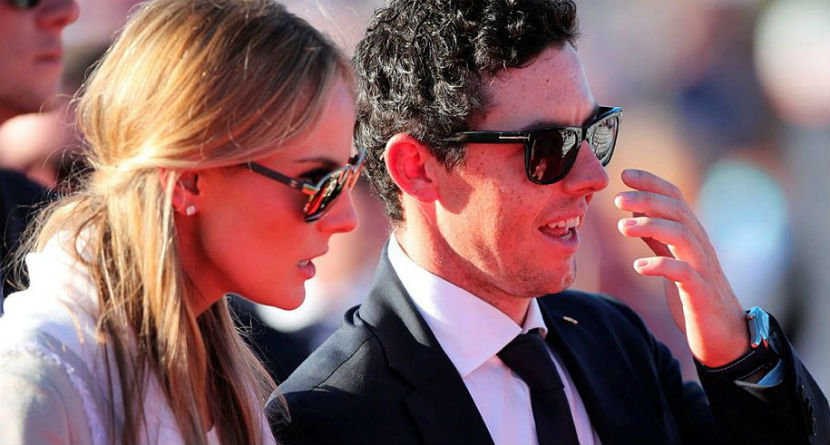 In case you didn’t hear, Rory McIlroy got married this past Saturday to a lovely American girl named Erica Stoll in lavish fashion at an Irish castle. But why have you not seen any photos of the four-time major winner and his new bride? Well, that’s because there was essentially a zero tolerance policy on pictures from guests to media alike. The venue was draped in tight security and guests were reportedly told not to bring their mobile phones.

One person who took serious offense to this was Independent columnist Michael O’Doherty. He let his feelings be heard earlier this week in an opinion piece slamming McIlroy for keeping his own wedding private:

There was only one thing missing, however – a single, solitary photo of the event.

When you make no provisions for the press and public interest, you can allow the day to descend into chaos and have it ruined for both the couple and many of their guests.

No photos, no interviews, even guests were told not to bring mobile phones lest any of them be tempted to put a photo or two up on social media.

It’s obsessive secrecy such as this that makes you wonder if Rory, by all accounts a sensible and polite person, has disappeared up his own backside when it comes to his biggest day.

Comment: Rory’s wedding shows that for some stars, publicity is a one-way street https://t.co/T84gVM2sr8 pic.twitter.com/JL7WD19XkN

They didn’t release one official photo to the media – a photo they could have had taken at any stage over the weekend and got any of their countless entourage to release without having to get their own hands dirty by actually dealing with the press personally.

The Irish media tend to be good to their stars. Sure, they show a sometimes unhealthy obsession with their private lives, but on the whole they tend to respect their privacy, rarely print negative stories and in return ask that the respect be reciprocated.

Rory had a chance to do just that last weekend and blew it.

Ironically, O’Dohtery did not attend the wedding. His invitation must’ve gotten lost in the mail.