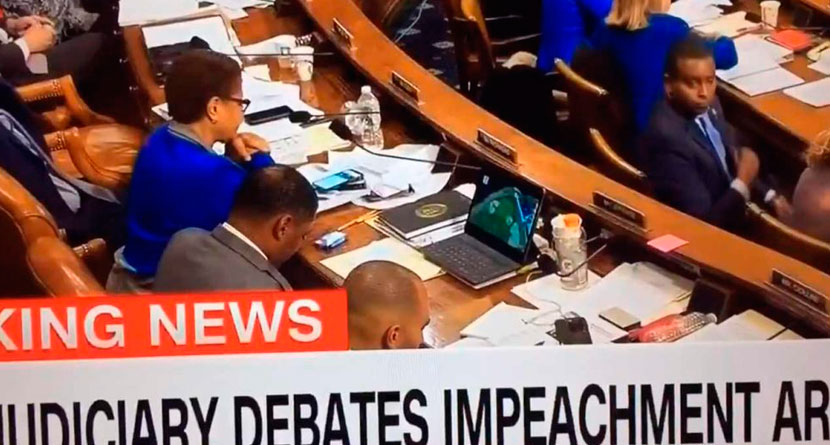 Just how entertaining was this past weekend’s Presidents Cup matches? For Rep. Cedric Richmond, D-La, it was more interesting than the articles of impeachment that were being debated by the House of Representatives Judiciary Committee.

With more cameras on the constituents than when Patrick Reed is in a bunker, it’s hard to believe Rep. Richmond thought he could get away with watching Friday’s foursomes matches at Royal Melbourne.

Late Thursday night at the Capitol, Rep. Richmond and others were enduring a 14-hour day debating the impeachment articles when a C-SPAN camera panned by Richmond’s seat and caught the representative from Louisiana’s 2nd district watching golf.

“Can you give me a Tiger update?”

Naturally, the congressman came under fire for his actions.

“What on earth is Democrat Rep. Cedric Richmond watching on his laptop during this impeachment markup?” Republican National Committee Rapid Response Director Steve Guest wrote on Twitter. “To me, it looks like Rep. Richmond is watching the President’s Cup golf tournament. Richmond’s actions are a disgrace.”

While the controversy raised questions about lawmakers and their duty to their country, one right-leaning professional golfer seemed to give Richmond a pass.

Even though he’s a Democrat, I’m gonna give Rep. Richmond a pass on this one. ?️‍♂️#PresidentsCup https://t.co/a9g8LmLpn5

“Even though he’s a Democrat, I’m gonna give Rep. Richmond a pass on this one,” PGA Tour Champions pro Bob Estes tweeted.

President Trump didn’t comment on the event during the impeachment debates, but he did congratulate U.S. captain Tiger Woods and his team following their come-from-behind victory on Saturday night.

Congratulations to Tiger and the entire U.S. Team on a great comeback and tremendous WIN. True Champions! https://t.co/wyjBAgoF7J