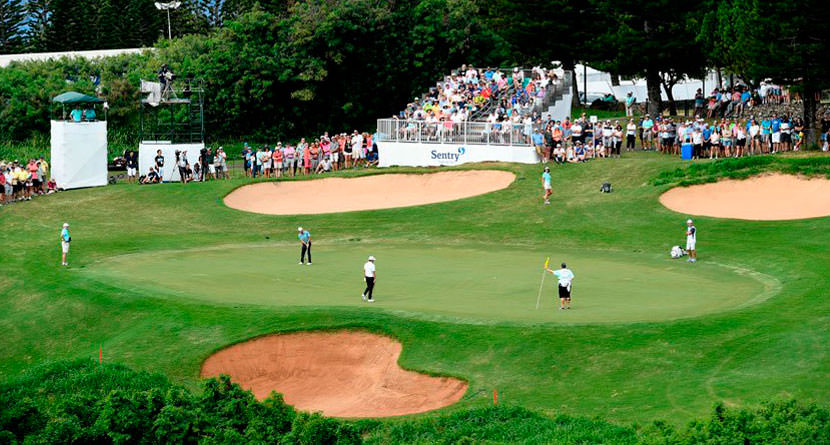 While most of the United States is under winter weather advisories and trying to figure out exactly what a bomb cyclone is, the PGA Tour’s 2018 season was kicking off in Maui in primetime. The sprawling views of the gorgeous coastline, whales breaching in the ocean and fans wearing shorts and tank tops was enough to help some forget about the weather that was outside their windows, but an eyesore has taken away from some of the Kapalua Plantation Course’s luster.

Along with some unusual weather patterns, the greens became contaminated by a rogue strain of Bermuda grass causing the greens at the Sentry Tournament of Champions to look worse than PGA Tour fans are used to.

Officials have defended the quality of the greens at the Plantation Course during the Sentry Tournament of Champions, admitting the color isn’t ideal however playability has not been an issue.

Unusual rain over the latter part of last year – where a record-breaking 20 inches fell from November to mid-December – coupled with a rogue contaminated version of Bermuda grass, has led to the putting surfaces in Maui looking slightly less green than usual.

And while the contamination and some brisk wind conditions have PGA TOUR officials running the greens a little slower than usual, the roll out has not been a concern.

“All of us at Kapalua Golf are cognizant of the visual appearance of a few of the putting surfaces at the Sentry Tournament of Champions. Tifeagle greens were resurfaced in 2004. Since that point, naturally a different strain of Bermuda grass has naturally crept in to a few greens causing the variance in coloration,” a statement from Kapalua Golf’s General Manager Alex Nakajima said.

Greens seem to be rolling well, but this was posted in player locker room in Maui this week. @grungyump pic.twitter.com/C5wPjLbPIM

“All greens are rolling true this week and for our Kapalua guests throughout the year. We are extremely proud of the entire Plantation Course and are dedicated to providing best possible experience for our players, spectators and television viewers around the world.”

Players backed up Nakajima’s claims post round on Thursday.

“Obviously the greens aren’t as good as what they usually are here,” Rickie Fowler said after an opening 4-under 69.

“But if you get the speed right and the line they’re still rolling pretty good. Everyone’s having to deal with the same stuff. You hit good putts, they go in most of the time, but you just can’t get too upset if you happen to get a bad break. That’s just going to happen.”