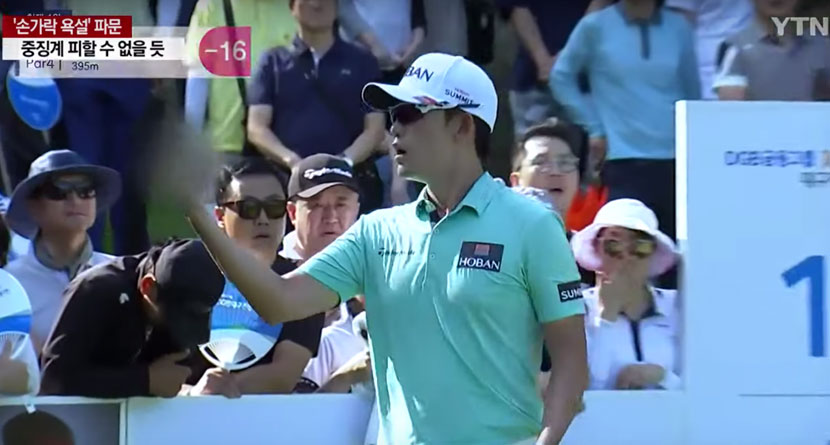 Korean PGA Tour player Bio Kim has had his controversial three-year suspension from the circuit reduced to one year, according to a story from the Yonhap News Agency. He will still have to pay his fine and complete 120 hours of community service to return to the Tour.

Kim, the leading money winner on the circuit this year, was handed a harsh three-year suspension last month for flipping off a fan whose phone shutter went off during his swing at the DGB Financial Group Volvik Daegu Gyeongbuk Open.


Playing the 16th hole of the final round and leading by one, Kim was distracted during his swing by the rogue phone and showed his displeasure by showing his middle finger to the offending fan before slamming his club into the tee box.

Kim would go on to win the event, his second win of the season, but an emergency meeting of the Tour brass unanimously voted to suspend Kim for three years for the obscene gesture.

“Kim Bio damaged the dignity of a golfer with etiquette violation and inappropriate behavior,” the KPGA said in a statement. The KPGA also fined Kim the U.S. equivalent of $8,350.

Two days after the incident, Kim held a press conference to apologize for his actions, and to say that he would be accepting his suspension without an appeal, but the public outcry over the length of the suspension led to it being reduced.

Bio Kim got on his knees pleading for mercy and forgiveness for flipping the bird at a jerk. Sergio destroyed greens in Saudi Arabia after taking a murderous regime’s money and then started posting happy pics to his Gram feed. pic.twitter.com/C0tkcrCzSZ

Kim is currently ranked No. 304 in the Official World Golf Rankings. The 29-year-old played Stateside on the PGA and Korn Ferry Tours where he held status as recently as 2018. He will be eligible to play on the KPGA again in 2021.