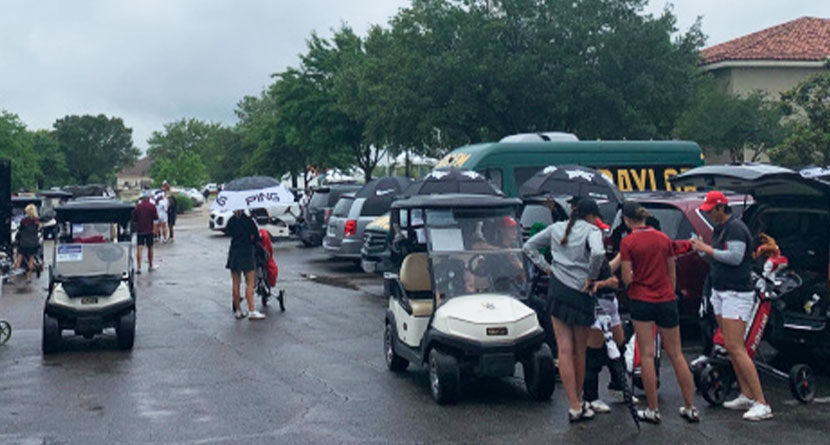 A year after COVID-19 unceremoniously ended the seasons and careers of many college golfers, an “unprecedented decision” from the NCAA did the same thing for 12 teams and three individuals at the 2021 NCAA Division I Women’s Golf Championships regional in Baton Rouge.

The regional, which featured 18 teams and six individual qualifiers, was to be played at top-seeded LSU’s home course, the University Club, but rain and storms throughout the week made the course “unplayable at a championship level,” according to NCAA Committee representative Brad Hurlbut.

NCAA rules stipulate that regional competition cannot extend past Wednesday, and that if 18 holes could not be completed, then the committee would use seeding as its criteria, meaning the top-6-seed teams and top-3 seeded individuals would advance to next week’s NCAA Championship.

So here it is, the LSU regionals at Baton Rouge has been cancelled due to the course being “PLAYABLE BUT NOT AT A CHAMPIONSHIP LEVEL”!!!!! Disgraceful how this whole week has been handled!!!! Every player worked so hard for this week and this is how we are treated!!! SHAMEFUL!!! pic.twitter.com/Z8FGrfYKLN

If the decision was difficult to reach, sharing that decision with the golfers outside the University Club clubhouse had to be even more difficult.

“This is one of the most gut-wrenching decisions and announcements that I’ve ever been a part of,” Hurlbut said on the steps of the clubhouse. “Even though the course is playable, it’s not playable at a championship level. Therefore, the top six teams that were seeded will advance, along with the top three individuals that were not on those six teams.”

Frustrated rebuttals could be heard throughout the video.

“Are you serious?” one questioned.

“This is a joke,” said a third. “You should be ashamed of yourselves.”

“Thank you for ending our careers!” a fourth said.

The 54-hole tournament was slated to begin Monday, but the possibility of a cancelation was brought to coaches as early as Sunday during a meeting with the forecast looking grim. Heavy rain postponed start of the event until Tuesday, but course conditions were deemed unplayable on Tuesday as well.

Uncertain they could even fit in 18 holes Wednesday to satisfy the minimum requirements, the decision was made to cancel the event altogether.

“I really didn’t have anything to say to my players,” he said. “It’s hard to be prepared for something like that, and strangely enough, you feel like you should be prepared because it’s almost déjà vu of what we went through 14 months ago with the season just abruptly ending and nobody being able to do anything about it. I just told the team that it’s not what we deserve and that I love them, and that’s really all I felt like I could say.”

Obviously there are parts of the course where there are big puddles and a lot of the bunkers are quite waterlogged. A rules official was asked if we could just take the bunkers out of play and she said “It’s better to just not play at all then play with no bunkers” @NCAA pic.twitter.com/PnKMhY0vys

Outrage has spread across the golf world from professional golfers, fans and critics, including major champion Stacy Lewis.

“There’s a lot I could say on this, but NCAA, you failed these kids,” Lewis wrote on Twitter. “Be creative, be willing to adapt, and most importantly, let their play decide who plays for a national championship.”

The advancing teams from the Baton Rouge regional by default were LSU, Ole Miss, Baylor, Oregon, Maryland and Alabama.

Next week’s NCAA Championships will take place next week at Grayhawk Golf Club in Scottsdale, Arizona.