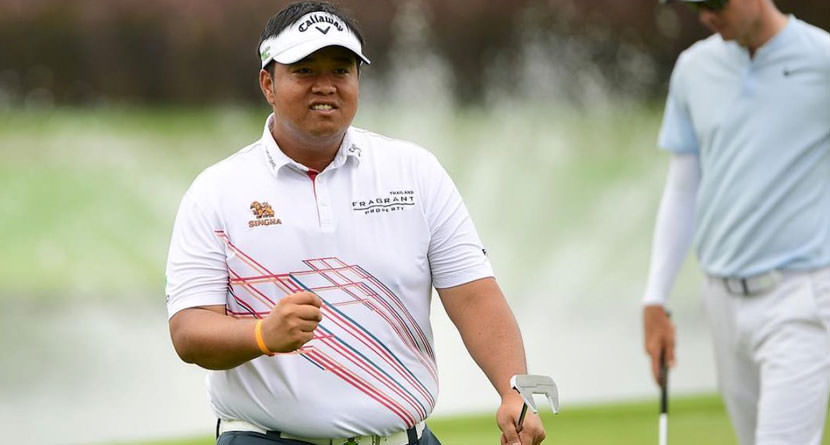 The last few weeks of 2017 have been full of ups, downs and a lot of math for Thailand’s Kiradech Aphibarnrat.

Affectionately known as the Asian John Daly, Aphibarnrat secured his place inside the top-50 in the Official World Golf Rankings with a clutch eagle on the 72nd hole of the Indonesian Masters, but he was forced to make a difficult decision this week if he wanted to guarantee a trip down Magnolia Lane this coming April.

.@kiradech needed an eagle today at the 72nd hole of the @IndoMasters to book his ticket to @TheMasters….

AND HE DID IT!!! A solo 5th finish was exactly what was required to move inside the top-50. See you at Augusta, Arm!! ???? pic.twitter.com/JjEXDpr47j

Nick Schwartz of USA Today’s For The Win blog laid out the conundrum Aphibarnrat found himself in prior to this week’s Boonchu Ruangkit Championship in Thailand.

28-year-old Thai golfer Kiradech Aphibarnrat, who finished 15th in the 2015 Masters in his first trip to Augusta National, finished his year high enough in the Official World Golf Rankings to secure an invitation to the 2018 Masters.

Of the many ways to qualify for the Masters, many players who aren’t regulars on the PGA Tour have to rely on their spot in the world ranking. The Masters invites the top 50 players in the world according to the ranking at the end of 2017, as well as the top 50 as of the week prior to the Masters.

Last Sunday at the Indonesian Masters, Aphibarnrat made an eagle on the 72nd hole to jump up the leaderboard to fifth place. He entered the tournament 56th in the world rankings, but currently sits in 51st. Since some players in the top 50 aren’t currently playing and will drop, Aphibarnrat stands to sneak into the top 50 and earn his Masters invite.

Here is what @kiradech is facing if he is playing this week:

There was still another event on Aphibarnrat’s 2017 calendar, though. He had committed to play in the Boonchu Ruangkit Championship in Thailand, but as rankings wizard @VC606 noted above, Aphibarnrat could have potentially knocked himself out of the Masters if he played poorly.

Coincidentally, Aphibarnrat withdrew from this weekend’s tournament with a back injury.

Kiradech Aphibarnrat has pulled out of the Boonchu Ruangkit Championship with a (very timely) back injury. Will finish year No. 49 and get into Masters.