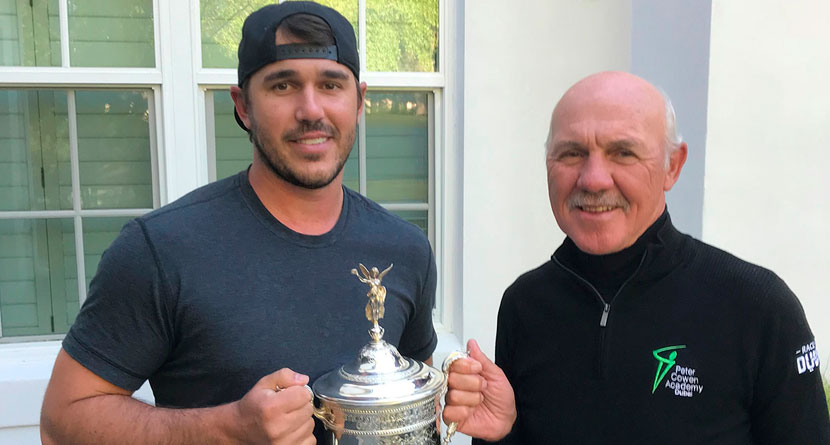 Pete Cowen may be the most successful coach in professional golf that you’ve never heard of, but that hasn’t kept the Englishman from making international headlines ahead of the first round of The Open Championship.

The short game coach to the two most recent major champions — Brooks Koepka and Gary Woodland — among a cadre of others spoke candidly to The Times, calling out fellow countryman Matt Wallace as a “complete idiot” who deserves a ban for the way he treated his caddie during a recent European Tour event.


Wallace was caught by Sky Sports cameras allegedly caught him physically and verbally abusing his caddie, Dave McNeilly, at the BMW International Open last month. Wallace was shown on the United Kingdom broadcast going after McNeilly in an aggressive manner both after hitting his approach shot long on the par-3 12th and again after finding the water off of the 18th tee.

I watched him play the 18th and this is the only dialogue with the caddie on my DVR pic.twitter.com/tbPXZReTmS

Ranked No. 23 in the world, Wallace would go on to finish in third place at the event and went off this as a 50/1 shot to win.

“(Wallace) is a complete idiot and the European Tour has to do something about it,” Cowen said. “A b——–g is no good, a fine is no good. He needs a ban. It’s a form of cheating because you’re putting your opponent off. The best thing would have been if his caddie had dropped his bag — I’d have chucked it in the bloody lake — but that wouldn’t do Dave McNeilly any good.”

"He is a complete idiot and the European Tour has to do something about it."

Golf instructor Pete Cowen did NOT hold back when calling out Matt Wallace: https://t.co/58WhLK19jt pic.twitter.com/XQBOiBitLk

Reached for comment by bunkered.co.uk, the European Tour released a statement that read, “We are aware of the matter and are reviewing it with all parties concerned,” but no punishment was levied.

Not taking the criticism lying down, Wallace’s camp fired back in a rebuttal article in a piece by The Telegraph‘s James Corrigan ahead of Wallace’s pairing with Tiger Woods over the first two rounds of this week’s Open Championship.

“It’s a shame on the eve of Matt playing with Tiger at such a special event that something has come up for which Matt has already apologized and signified that he is and has been addressing,” Wallace’s agent, Chubby Chandler, said. “Matt is determined to control his emotions and has been working with Dr. Steve McGregor on the issue and the pair are already confident they have made great strides, together with input from Dave.

“Matt and Dave have a terrific relationship and are very close. Matt is only in his third full season as a Tour professional and his rise from the mini-tours has been remarkable and an example of hard work and determination paying off. He admits that sometimes his eagerness to succeed has got the better of him and has faced up to it, both with his team and the media.

“He’s a good kid who hasn’t smashed up markers or abused officials unlike some other players and to say he should be banned is utterly ridiculous. It’s funny, I remember a young player who I was on Tour with in the 70s who was renowned for his tantrums and snapping clubs. His name was Pete Cowen.”

Wallace and Woods will be joined by Patrick Reed for the first two rounds of the final major championship, teeing off on Thursday at 3:10 p.m. local time.