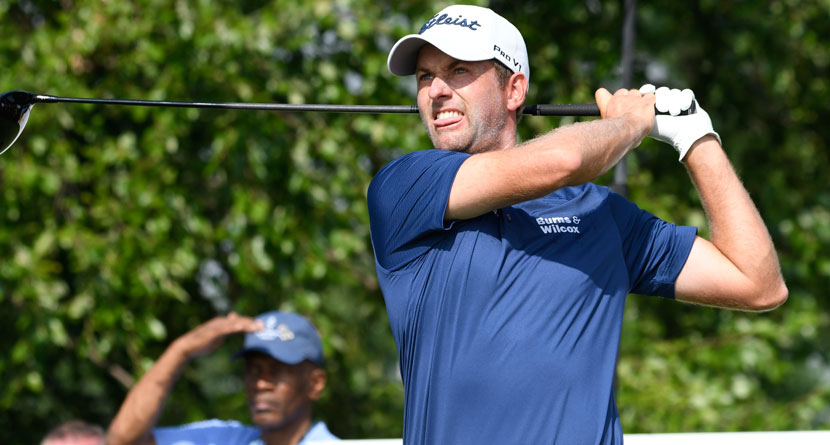 On the PGA Tour, every shot counts, which is why Webb Simpson was fired up about a rule change that he claimed “cost (him) a few shots” during the second round of The Northern Trust.

Playing the par-4 third hole during his second round, Simpson said he felt something “funny” after hitting his tee shot. Upon closer investigation, Simpson determined that the club was cracked. He verified the driver was damaged with his caddie and playing partners, but due to a recent rule change, he wasn’t able to replace the club.

“I always carry a backup driver with me. I have for years,” Simpson said after posting a 2-over par 73. “The rule has been, if it’s cracked, you can go get your other one. But the rule’s changed, so I couldn’t change.”

Wow. New rules state that a clubhead has to be “significantly damaged” (not just cracked) for a player to be able to replace it during a round. ? #CracksKill https://t.co/TwUwbPukMD

“There’s a lot of rules that I don’t know,” Simpson continued. “Honestly a lot of players are still really confused. My ball rolled today on the fifth hole. Nobody knew what to do. And everybody’s going to say, well, you guys should know the rules. Well, there’s hundreds of rules to know. They changed the rules a few years ago, and they have edited some of those rules since.

“The consensus among me and the other guys I was with and the other players in the rain delay was if it’s cracked in the driver – it’s cracked. What harm is done by letting me switch, you know, heads? I don’t know why they changed it. I’d love to know. So glad it didn’t cost me a missed the cut, but it’s unfortunate. I feel like it cost me a few shots.”

Simpson’s first-round score 65 was enough to allow him to make the cut by a few strokes, but with big money and FedEx Cup points on the line, Simpson had enough reasons to be frustrated.

He told reporters that he hit the cracked driver four more times during his second round and opted for a 3-wood on another occasion that he would have hit driver on if it were not cracked.

With his backup driver in play over the weekend, Simpson fired rounds of 67-70 to climb into a tie for 18th place, earning him $129,500 and 188 FedEx Cup points to leave him at 11th heading into next week’s BMW Championship and in a good position to make it to the Tour Championship in two weeks.