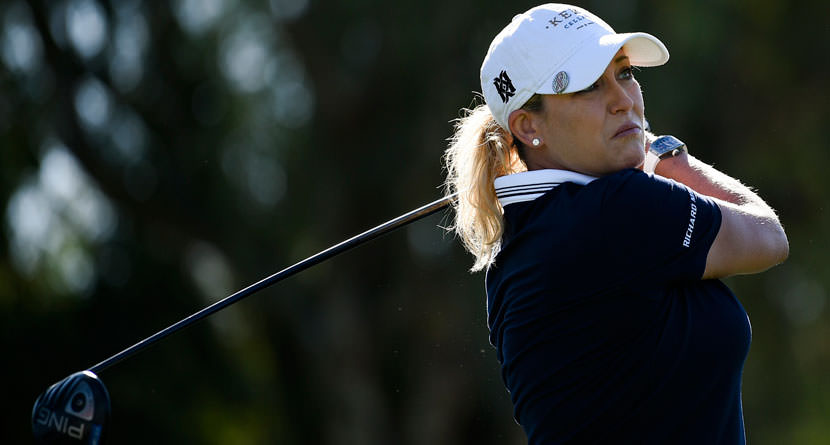 The second major championship of the LPGA season has been deluged by Subtropical Storm Alberto. Over the last week, Shoal Creek Golf and Country Club in Birmingham, Alabama has been inundated with more than six inches of rain, including nearly four inches in the last 48 hours just two days before the U.S. Women’s Open.

Tuesday’s practice rounds were completely washed out with the range only opening at 2:30 p.m. despite sporadic showers still falling throughout the evening. The inevitable question of how the USGA will handle the course has already drawn the ire of some of the biggest names in women’s golf.

The USGA has never allowed lift, clean and place in its 126 years of staging championships and they are steadfast in their company line despite the amount of water Shoal Creek has taken.

More from @CristieKerr: "What are they trying to prove? The course is unplayable. There's going to be mud on every ball. It's not fair. Tropical storms aren't part of the game…This doesn't protect the integrity of the game."

“I would say it is our intention to play 72 holes to identify our champion, and play the ball as it lies,” said John Bodenhamer, the USGA’s senior managing director of championships and governance, according to GolfChannel.com’s Randall Mell.

That assertion drew the wrath of 2007 U.S. Women’s Open champion Cristie Kerr. Kerr, who said the course was “soaked” and “super muddy” on Monday before another two inches of rain fell.

“If they play it down, it’s a joke,” Kerr said. “The course is saturated beyond comprehension. I know they run a lot of championships, but how many have they run after a tropical storm came through?

“The course is unplayable. There’s going to be mud on every ball. It’s not fair. Tropical storms aren’t part of the game.”

Bodenhamer said that the USGA will continue to monitor the course conditions through Wednesday and Thursday, but it appears it will take “extraordinary circumstances” to change the USGA’s stance, according to Mell.

I have nothing but respect for the USGA and no one runs events better. I have played in over 20 US Womens opens and haven’t seen Mother Nature cause course conditions like this. We as players all want the conditions tough but fair for our national championship.

“We’re evaluating everything,” Bodenhamer said. “We’re looking at the weather. We’re looking at all the conditions. You know, we have a lot of experience with this sort of thing.

“Our intention is to rely on our considerable experience. We played 72 of these U.S. Women’s Opens, in fact, 117 U.S. Open Championships playing the ball as it lies, finishing the competition and so it’s our intention to do that this week as well.”

Stacy Lewis agreed with her colleague Kerr saying, “You either need ground under repair, or you need to play the ball up. With ball in hand, it’s going to be good golf that wins. I would rather the tournament be decided based on good golf rather than the luck in whether mud stays on your ball or not.”