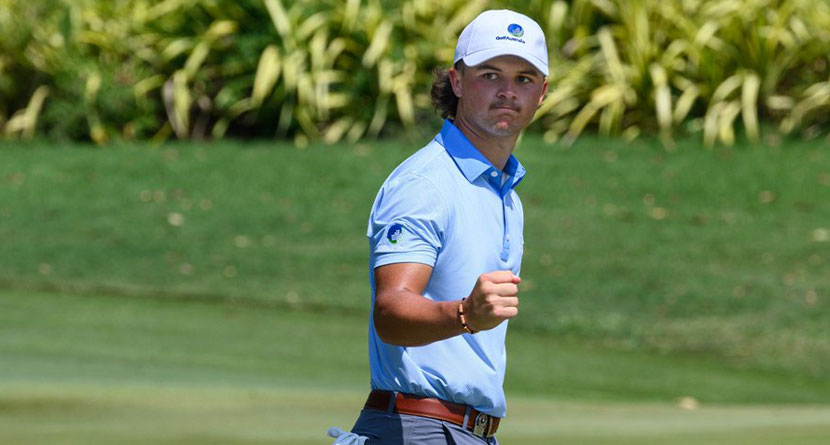 CHONBURI, Thailand (AP) — Harrison Crowe of Australia won the Asia-Pacific Amateur on Sunday with a shot that summed up his wild final round, an up-and-down from behind the 18th green that gave him a one-shot victory and a spot in next year’s Masters and British Open.

Crowe closed with an even-par 72 at Amata Spring Country Club to hold off Bo Jin of China, who was poised to win until he missed the island green on the par-3 17th and made double bogey.

That gave the 21-year-old Aussie a one-shot lead going to the 18th. His approach on the 477-yard closing hole was headed left, but he hit it well enough that it narrowly cleared the water. Crowe played a superb pitch just onto the green, and it rolled out to a few feet that set up the winning par.

“It means so much,” Crowe said. “I came out here this week with something to prove, and I’m just really proud of myself the way I handled myself on and off the course.”

Jin just went over the back of the 18th green and made par for a 71. The Oklahoma State junior has finished in the top 10 each of the last three years in the Asia-Pacific Amateur, which his brother Cheng Jin won in 2015.

“This is not the position I wanted to be in but I am very proud of the way I played this whole week,” Jin said. “You just can’t take anything away from Crowe and the way he played the back nine.”

Crowe began the final round with a two-shot lead, which was gone in one hole after he opened with a bogey and Jin made birdie. Crowe shot 39 on the front nine and at one point trailed by three shots.

Crowe made his first birdie on the 11th — the start of four birdies in a five-hole stretch to catch up to Jin. The Aussie then dropped a shot on the 16th to fall one behind.

The turning point was at the 17th, a 129-yard hole with the target in the middle of a lake. Jin caught a gust of wind and came up short and into the water, then he missed a 12-foot putt that left him with a double bogey and a one-shot deficit.

Crowe is No. 43 in the world amateur ranking and had hinted at turning pro next month. Instead, he remains an amateur and heads to Augusta National in April for the Masters and Royal Liverpool in July for the British Open.

He is the third Australian to win the Asia-Pacific amateur since it began in 2009.

The championship will be played at Royal Melbourne in Australia next year, and Jin hopes to give it one more try.

“I have got another year in the college so if they invite me back, I am definitely coming to Melbourne next year and try this all over again,” Jin said. “Hopefully, I will finish one position better.”