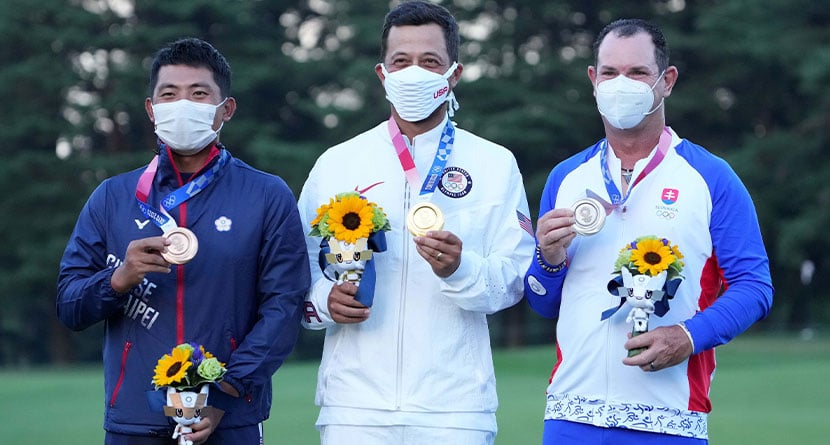 Part of the beauty is that the Olympic Games aren’t contested for monetary gain — at least not overtly.

It would surprise no one to remind them of the money that comes as a byproduct of being an Olympian; there are plenty of ways for athletes to capitalize on their talent or notoriety. What may be more surprising to learn is that national Olympic committees pay their athletes based upon finishing positions in their respective disciplines.

As it pertains to the 2021 Olympic Golf Competition, a bronze medal was worth roughly five times more than a gold medal.

That’s because the Chinese Taipei (Taiwan) Olympic Committee is among the highest-paying OCs in the Games. According to Forbes, only Singapore pays its athletes more than Chinese Taipei when it comes to medals earned.

Fun fact: Chinese Taipei pays its Olympic medal-winning athletes more than nearly any other country. So when C.T. Pan won that 7-for-1 playoff for bronze, he made $179k. That’s nearly five times more than the $37,500 Team USA paid Xander Schauffele for winning gold.

Like most things, it’s simply a numbers game. The U.S. has to routinely pay out more medalists than Chinese Taipei or other smaller countries who garner more renown for their medal-earning performances.

If you win gold for Singapore, you make $700k more than if you win a gold for USA pic.twitter.com/JeDbEBP6xI

“For me specifically, I don’t play golf for money or medals, in all honesty,” Schauffele said after his win. “I just play to be competitive and I want to beat everyone.”

That’s good for him. It’s also nice that he’s cashed more than $5 million in earnings this year, so the financials more or less take care of themselves.