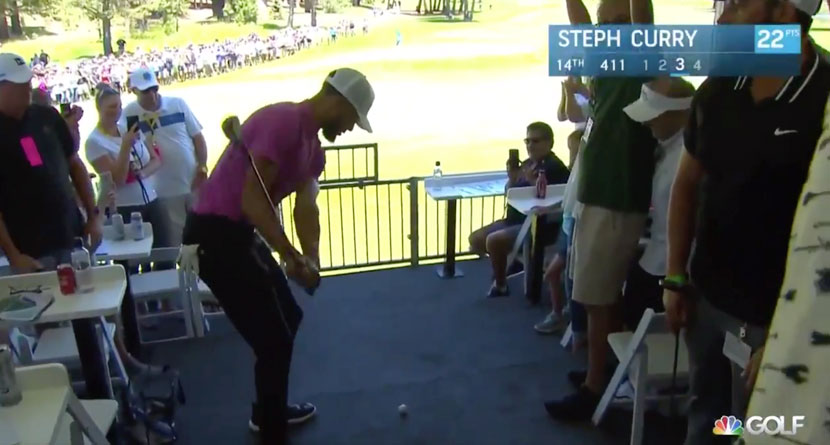 The annual American Century Championship on Lake Tahoe is a veritable who’s who of golfing celebrities, and on Saturday some fans got an up-close and personal show courtesy of NBA All-Star Stephen Curry.

The three-time world champion has some serious game. He plays off of a 0.3 handicap and has teed it up on the Korn Ferry Tour in recent years, but all that experience couldn’t have prepared him for the situation he faced behind the 14th green of the Edgewood Tahoe South course.

Curry bombed his second shot into the par-4 well long of the green and into a spectator chalet. With an assist from entertainer extraordinaire Justin Timberlake, Curry pulled off the shot of the tournament to this point.

One ?️ to the @StephenCurry30 show, please.

He wasn’t able to get up and down for the par, but the bogey didn’t cost him any points in the modified Stableford format.

Curry ended the day with a 5-over par 77 for the second consecutive day, which was good enough for a two-day total of 30 points. Curry trails defending champion and fellow hospitality tent expert Tony Romo by 21 points heading into the final round.

Romo pulled off a similar earlier this year at the AT&T Pebble Beach Pro-Am.