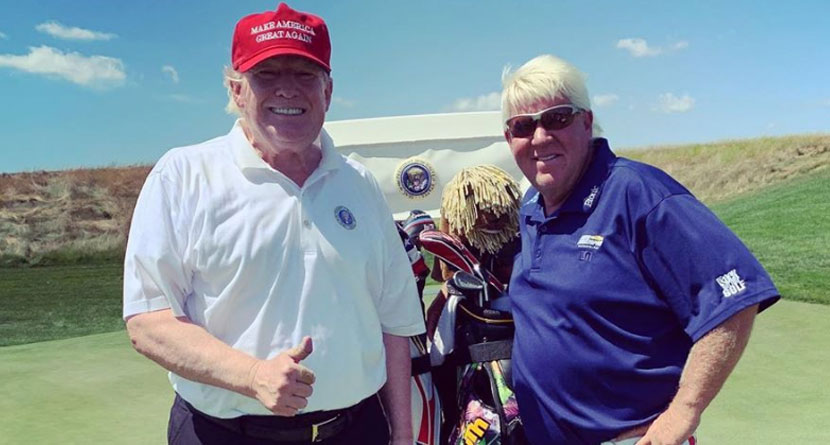 A lot of professional golfers have teed it up with President Donald Trump both before and during his time as the leader of the free world, but none have been as outspoken about their enjoyment of the round as John Daly was this week.

Trying to toe some invisible line so as to not bother people, the likes of Tiger Woods, Rory McIlroy, Dustin Johnson, Jack Nicklaus, Brad Faxon and Lexi Thompson have waded into the waters of answering questions about their relationship with President Trump with caution; not Daly.

Playing at Trump Bedminster in New Jersey on Monday, Daly and the President enjoyed a victorious match around the links, and afterwards, Daly posted to social media.

“I’m proud to be an American, especially with this man leading our country!” Daly captioned a post of he and the President on the course. “One of the greatest days of my life! Thank you for a great day.”

I’m proud to be an AMERICAN, especially with this man leading our country! One of the greatest days of my life! Thank you for a great day #potus #dad ….you are the best! @realdonaldtrump @pga_johndaly ???????????? #americafirst #peoplefirst #with #the #greatest #leader #of #our #country #proud #American #redwhiteblue #Maga #potus

In a subsequent interview with TMZ, Daly went on to sing the President’s praises as a golfer, debunk some myths about his integrity on the course and even called out another former White House resident who was more lax with the Rules of Golf.

“He can hit it,” Day said. “We gotta work on his short game a little bit, but he hits his driver and 3-wood absolutely perfect. He doesn’t miss many fairways. He’s a good 8, 9-handicap.

“It’s funny how these people say, ‘does he cheat?’ Well, when he goes out and plays, if he hits a bad shot, he might hit a mulligan, but he doesn’t count it when we’re playing the match.”

Daly reported that he and the President won their match 3-up and said that their pace of play was quick — three and a half hours. Daly said he made nine birdies over the course of the round, but he needed every one of them as Andrew Giuliani, the Public Liaison Assistant to the President and the son of former New York City mayor Rudy Giuliani, made six or seven birdies.

Daly rounded out the conversation by reiterating that the Trump-as-a-golf-cheater narratives are way overblown. Daly said the President usually plays match play, and if he hits a bad shot, he’ll drop a ball and hit another one, but it wouldn’t count towards his score in the match.

“It’s just amazing that people call him a cheat in golf,” Daly said. “If you want to call a cheat in golf, I’ll tell you, Bill Clinton, he took a mulligan on putts, chips, when I played with him. I don’t think Bill Clinton could have broken 100. At least the President, Mr. Trump, he can shoot 80… 78 to 84, probably.”

Overall, Daly praised his day on the links with President Trump and ranked him as the second-best golfing president he’s played with behind only George H.W. Bush.