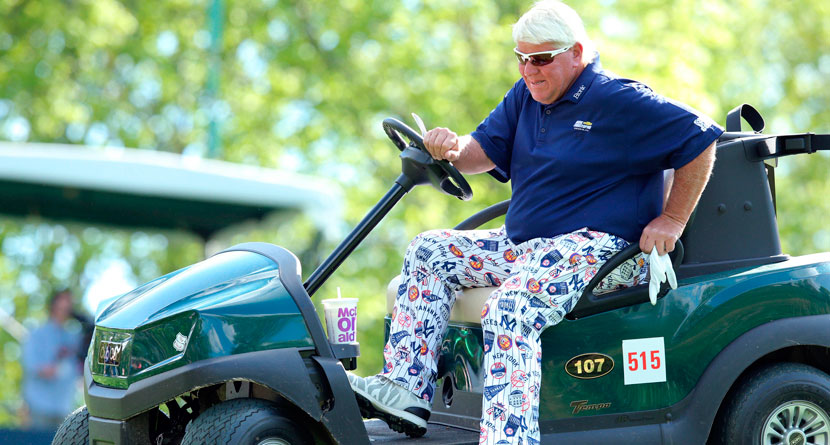 John Daly will be playing later this month at The Open Championship at Royal Portrush, but he will likely be in serious pain and without the aid of a cart.

The R&A released a statement on Saturday detailing their decision, which included their beliefs on a level playing field as well as concerns about the terrain at the venue.

Daly Petitions R&A To Use Cart At The Open

“The R&A have carefully considered the request from 1995 Champion Golfer of the Year John Daly to use a buggy at The 148th Open at Royal Portrush later this month,” the statement read. “The R&A appreciate the difficulty John is facing and have full sympathy for him as this is clearly a serious, long-term condition. Having considered all of the relevant factors, the Championship Committee has decided to decline his request.

“The R&A believe that walking the course is an integral part of the Championship and is central to the tradition of links golf which is synonymous with The Open. We must also ensure that, as far as possible, the challenge is the same for all players in the field. The terrain at Royal Portrush is not suited to buggies and indeed the club itself does not permit their use. We have a serious concern that some parts of the course, where there are severe slopes and swales, would be inaccessible. This is not a decision we have taken lightly but we believe it is the right one for The Open.”

Full statement on John Daly’s request to use a buggy at The 148th Open.

Not someone to lie down easily, Daly responded to the news with a post of his own in which he described his disappointment with the governing body’s decision.

“Just got word the R&A turned down my application to use a cart at the 2019 Open Championship,” Daly published to social media. “Quite disappointed they do not see it the same way our PGA of America and PGA Tour sees it. Different continents different laws???

“I believe all who have earned the right to compete should be afforded that right to compete and give it their best shot. While I trust the R&A’s decision was made with good intentions, I could not disagree more with their conclusions.”

Daly Receives Permission To Ride Cart At The PGA

Daly said that his doctor, Jim Bradley, the orthopedic surgeon for the NFL’s Pittsburgh Steelers, confirmed the medial and patella femoral degenerative arthritis in his right knee on Friday, but vowed to give it a go in a few weeks in Northern Ireland.

“Shortly I will need either uni-compartment or total knee replacement,” he wrote. “Before that time comes, my plan is to give it a shot in two weeks at Portrush. Fingers crossed I can make it through the pain.”

“John has a special place in our hearts as a Champion Golfer and he will always be welcome at the Championship both at Royal Portrush and in future,” the R&A concluded.