WATCH: Lee 6-Putts Then Withdraws From US Open 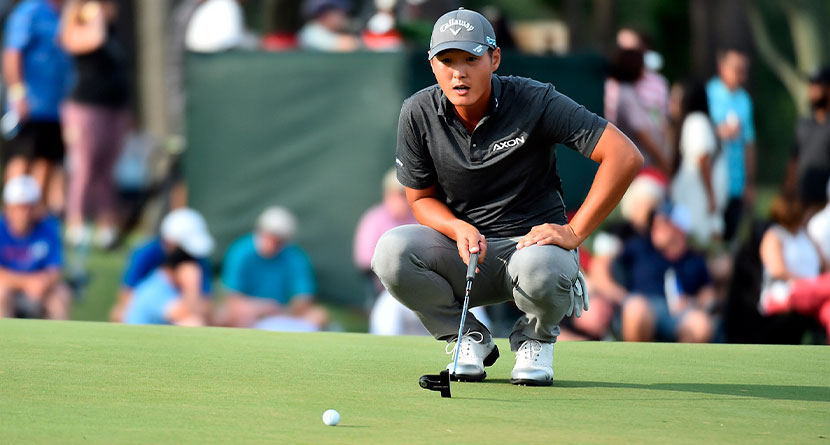 One of the tenets of a U.S. Open is wearing down the best players in the world and making them prove that they’re not only capable of withstanding the toughest conditions physically, but also mentally.

On Saturday at Winged Foot, Danny Lee’s mental fortitude appeared to expire as he attempted to close out his third round.

Reaching the diabolical putting surface on the 18th green at the historic venue, Lee faced a four-foot putt to save par and shoot a respectable score of 3-over par 73.

What happened next has to be seen to be believed.

Lee made an aggressive stroke on his par putt, but missed. Faced with nearly twice the distance coming back, he went through his paces to make the putt. As that putt missed on the high side, Lee’s wires got crossed and he went into full-fledged meltdown mode.

Left with a tap-in, Lee pounded his ball off the cup and proceeded to take three more strokes to hole it for a quintuple bogey 9.

Clearly frustrated, Lee attempted to release some frustration on the bottom of his golf bag taking a mighty swipe.

Danny Lee’s wrist sure looked fine while he was slamming his putter against his bag…pic.twitter.com/1Rk9AFALzL

Whether or not the withdrawal was the result of an actual wrist injury — which looked like it could have occured during his meltdown — or simply frustration, the fact of the matter is that Lee opted to leave at least $25,000 on the table in earnings.

Having already made the cut, the last-place finisher among those who played the weekend, Shugo Imihara made $25,901 at 25-over par.

Even with his 9 on the 18th hole, Lee was only at 13-over par. A solid round on Sunday could have seen Lee cash over much more than that.