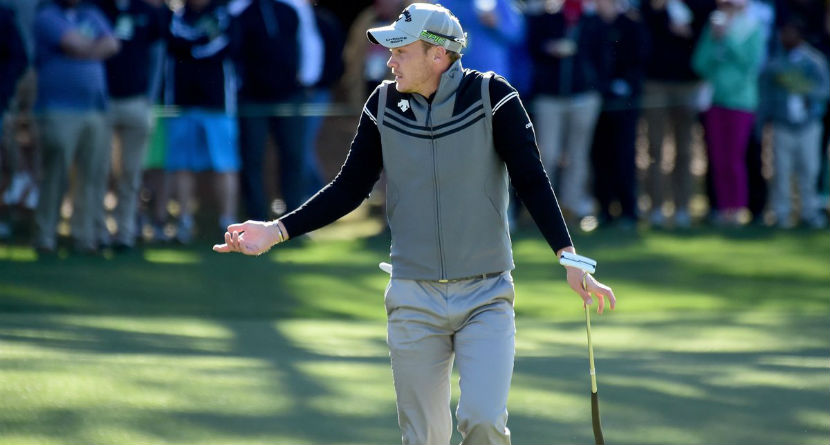 Golf is fickle, even for Masters champions. One day you are on top of the world, the next you’re using four-letter words to describe your game. Englishman Danny Willett spoke about the state of his game and summed it up in one word, which we can’t repeat here.

“It was amazing,” Willett sarcastically told The Telegraph. “There’s nothing quite like teeing off at 7:55 on the Sunday of an Open. It really gets your blood flowing.”

Coming off a solo 76th (out of 77 who made the cut) at Royal Birkdale, it was just his second made cut in his last eight worldwide starts. The 2016 Master Champion has also slipped to No.43 in the world.

“S—,” Willett said when he was asked to describe his game. “It’s just frustrating. Every time you feel you are getting somewhere with it you take another two steps back. Before you know it you feel you are 10 steps further back than you were a few weeks before.

“The Masters was 13 months ago. I’m still the same person, but the golf’s not in the same place.”

According to a Golfweek’s Brentley Romine, Willett has been battling a lingering back issue for quite some time. However, if it will require surgery still remains a question mark.

Willett saw a back specialist and underwent an MRI the week before the Open. The results of the MRI weren’t promising.

“The L5 (disc) and the sacrum were out from the x-ray which is why it hurts when I rotate on it,” Willett said.

He was put on the pain medicine Voltarol as he spent five days on his back. He only started hitting balls the Friday before Open week. The Open was just the first tournament that Willett has played all four rounds of since the WGC-Mexico Championship in March. He has withdrawn three times in two months.

Is surgery on the horizon?

“I don’t know,” Willett said. “I’d do anything that helped. I don’t think it does need surgery. It’s more just getting it in line, and the only thing that irritates it massively is swinging poorly.”