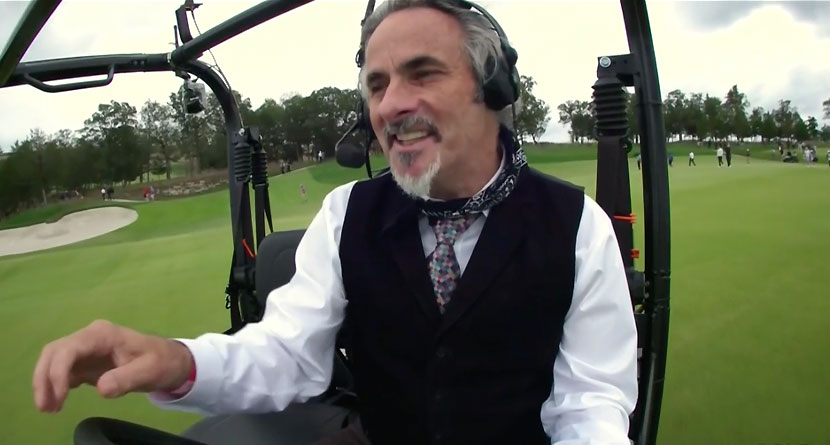 If you were to be told the name as opposed to reading it, you may be a bit intimidated thinking the spelling was of the name’s homonym for bodily harm, but in reality, it’s an homage to the late great Payne Stewart, a Springfield, Missouri native who would go on to win 11 times on the PGA Tour, including three major championships.

Stewart’s professional career spanned just shy of two decades before his tragic passing, but during those 19-odd years, Stewart was known out on Tour as one the supreme pranksters on the circuit.

During Tuesday’s Payne’s Valley Cup, an 18-hole charity exhibition that featured Woods, Rory McIlroy, Justin Thomas and Justin Rose, on-course analyst David Feherty stole the show for a few minutes in the middle of the round as he regaled the audience with one of his best Payne Stewart stories, which featured a hotel room key mix-up, a courtesy car and a semi-dead groundhog.

Feherty set up the story as only he can, saying, “We were playing in Houston and we were staying in the love LaQuinta on Interstate 45,” he said. “It was a four-star hotel and you could see three of them through a hole in the roof.”

He explained that the night before, he and Payne were down at the bar and mixed up their room keys somehow. The next day, Stewart played in the morning while Feherty played in the afternoon. After Stewart’s round, he hit a groundhog with his courtesy car, and being the prankster that he was, he loaded the animal up to use it in a gaffe.

“He stopped, investigated the damage on the car — not too bad — and walks around the back and thinks to himself, ‘that’s a perfectly good dead groundhog and I’ve got Feherty’s room key.’“

After Feherty’s afternoon round, he came back to the hotel all hot and bothered only to find out that Stewart’s furry friend hadn’t quite gone to rodent heaven just yet.

“Later that day, I get back and I’m kind of sweaty and grumpy, and I go into the room and I put my clubs down and by the desk, and what appeared to be a beaver jumped out and went straight for my crotch,” he so eloquently said. “It chased me around the room for what seemed like an hour, but was probably 15 seconds until it finally keeled over and went dead, or whatever groundhogs do — went to Punxsutawney.”

The story was met with laughs from Dan Hicks and Paul Azinger, a close friend of Stewart’s, who were on the call of the match.

“He had that juvenile sense of humor,” Feherty said. “It never left him.”