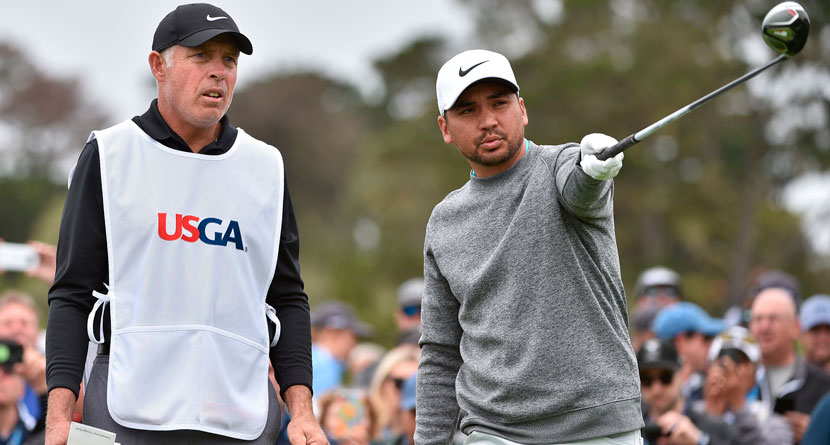 For the third time summer, Jason Day will have a new caddie on the bag at this week’s BMW Championship after the 2015 PGA Champion parted ways with legendary caddie Steve Williams.

Day and Williams split following Day’s missed cut at the first leg of the FedEx Cup Playoffs, The Northern Trust at Liberty National last week, after working together for just six events

Day Thinks He Has “Severely Underachieved” In Career

“Parting with Steve was a mutual decision and not an easy one to make,” Day told the Australian Associated Press. “He is the ultimate pro; it was a real learning experience being exposed to a caddie who has achieved what Steve has. He has worked with the best. But it was a disconnect of old school and new school.

“Steve has become a friend and I have a lot of respect for him. I thank Steve for everything he taught me.”

“it was a disconnect of old school and new school.”

Day brought Williams in to work for him full-time beginning at the U.S. Open in June saying that it wasn’t a snap decision to replace his friend Luke Reardon on the bag, but a longterm play to get himself back to the top of the game.

Williams most notably caddied for Tiger Woods for 13 of his 15 major championship victories as well as Day’s fellow countryman, Adam Scott, en route to Scott’s lone major victory in 2013 at the Masters. Williams also caddied for the likes of Greg Norman, Peter Thomson, Raymond Floyd and Ian Baker-Finch during his more than 40-year career.

“I think I’ve underachieved up until now,” Day said prior to the U.S. Open. “I feel like I’ve got a game that when it’s on, I can win most tournaments. And the big thing for me is to go ahead and believe that and have trust in my abilities that I can do that. And now that I have Steve on the bag, I think hopefully that will flourish and I can make winning more of a habit.

“I know that how we’re going to work together, it will slowly evolve over time, and we’ll become a lot more efficient. And I know that if I have someone on the bag like Steve, I think in certain situations, when it comes down to the crunch, especially either Sundays or even Saturdays, or even Thursdays or Fridays, depending on the certain situation, he’ll be able to calm me down.”

However, that evolution was never able to take place as Day missed the cut in two of the six events the pair worked together, including the Open Championship.

Day will temporarily use friend and fellow Tour golfer David Lutterus. Lutterus, who is ranked 2,070th in the world, hasn’t played in an Official World Golf Ranking-sanctioned event since last September on the PGA Tour China Series.

Day is 50th in the FedEx Cup standings heading into the week at Medinah. He’ll need a strong finish to move up the requisite 20 spots to reach the top-30 to earn a berth at the Tour Championship at East Lake in Atlanta next week.