Day, Fowler To Team Up In 2017 Zurich Classic 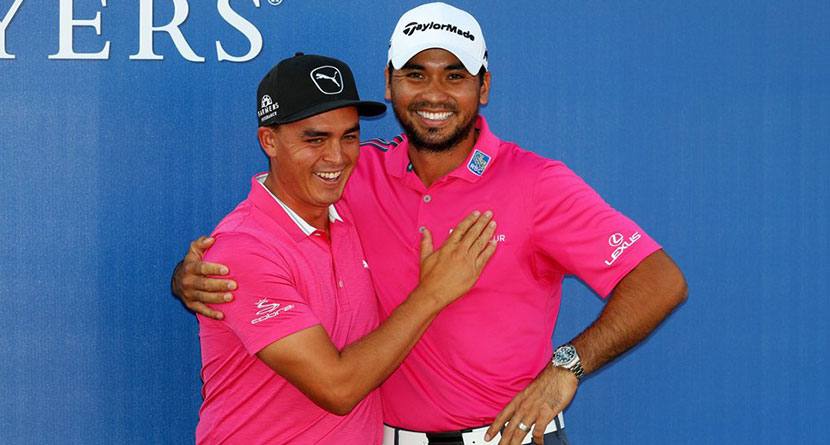 If the Zurich Classic’s new two-man team format was ever going to gain traction, it needed some big names to help usher in the new era in New Orleans. You can now check that off the to-do list.

Rickie Fowler announced he’ll be playing with Jason Day in next year’s @Zurich_Classic.

Reports of the tournament’s adjustment from a normal stroke play event to a two-man team competition surfaced last week, and the PGA Tour Policy Board approved the format in an announcement on Monday morning.


The PGA Tour Policy Board has approved an exciting new two-man team format for the Zurich Classic of New Orleans which will feature two rounds each of Foursome and Four-Ball competition.

The change will be in effect for the 2017 tournament, which is scheduled for April 24-30 at TPC Louisiana in New Orleans. It has drawn widespread interest among TOUR members and already has resulted in a couple of high-profile commitments. Announcing their participation today were the teams of World No. 1 Jason Day with Rickie Fowler, and 2015 Zurich Classic of New Orleans champion Justin Rose with Henrik Stenson, the Olympic gold and silver medalists, respectively.

“I’ve loved being a part of team events throughout my amateur, collegiate and now professional career. I’m so excited that the TOUR and Zurich are making this part of our schedule and can’t wait to tee it up with Jason in April,” said Fowler, the 10th ranked golfer in the world.

“As a longtime ambassador, the Zurich Classic is already a special tournament for me,” said Rose, who beat Stenson by two strokes to become the 2016 Olympic Gold Medalist in Rio de Janeiro. “The addition of a team format adds a new, incredibly exciting element to the event. Henrik and I are very excited to tee it up together in April, and hopefully, we can continue our longstanding chemistry and success in team formats.”

The new 72-hole stroke play format will feature Foursomes (alternate shot) during the first and third rounds and Four-Ball (best ball) during the second and fourth rounds. The starting field will consist of 80 teams (160 players). Each of the top available players from the PGA TOUR Priority Rankings who commits to the tournament will choose his partner, who in turn must have PGA TOUR status unless he is chosen as a tournament sponsor exemption.

Following the conclusion of the second round, there will be a cut to the low 35 teams and ties at the 35th position. In the case of a tie after 72 holes, there will be a sudden-death playoff using the Four-Ball format.

Zurich’s team of ambassadors has been huge in making the event a success in the past, and their lineup of stars teaming up will only help the tournament going forward.