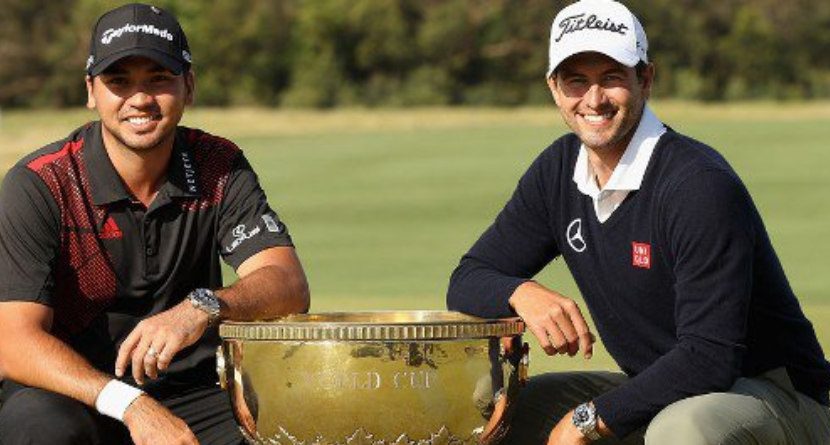 The World Cup of Golf returns for its 58th edition November 24-27 and teams are taking shape. The biennial competition will be staged this year at Kingston Heath Golf Club in Melbourne, Australia.

28 countries will compete for an $8 million purse in a team event. It’s like if golf had its own Olympics, but instead of winning a medal, you receive an abundance of cash, $2.56 million to be exact. The top ranked player by country who accepts gets to pick a teammate from the same country within the top 500 according to the Official World Golf Rankings.

Format is simple. Day 1 and 3 are foursomes (alternate shot). Day 2 and 4 are four-ball (best ball). If only the IOC saw it that way.


The field should be a good one as national pride will also be on the line. Two big names that have committed so far are the 2013 defending champions who will have home-field advantage, Aussies Jason Day and Adam Scott.

“The victory at the 2013 World Cup of Golf was a kick-start to a phenomenal stretch of golf for me,” Day said in a release, according to a Golf Channel report. “I am truly looking forward to the new format with Adam. I really can’t imagine a better scenario than to represent Australia in our home country, with one of my good mates at Kingston Heath, one of my all-time favorite courses.”

Interesting timing considering they waited until after the Olympics to make their decision where they both opted not to participate. In fact, Day felt so inclined to tell the media he only watched one hole of the event.

“I didn’t watch any, not one shot, until the last hole,” Day said Monday evening in a conference call, according to AP’s Doug Ferguson. “It was great to see Henrik and Justin duel it out. Kuch had an amazing run on the last day, and it looked like it was a very successful opening for golf to be back in the Olympics.”

Here’s a snapshot of what the field is looking like so far:

Field for World Cup of Golf, to be played late-Nov. at Kingston Heath. Highest rank to commit picks his partner. pic.twitter.com/ttdhVEh8D6