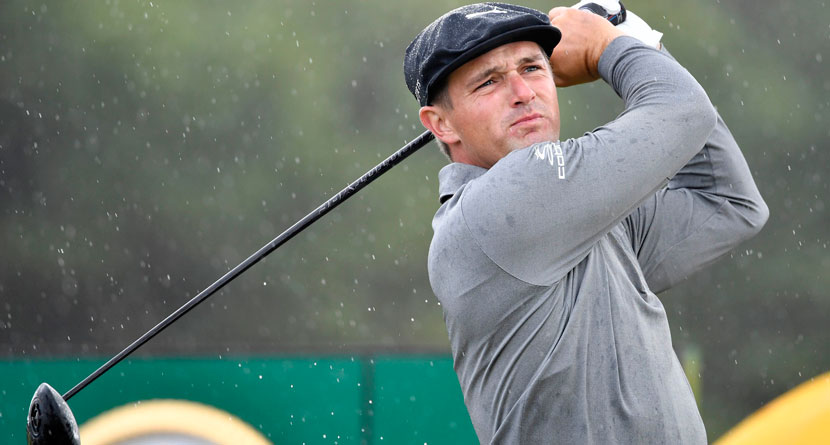 The R&A’s driver testing ahead of last week’s Open Championship and the subsequent revelation that four of the 30 drivers tested — most notably Xander Schauffele’s — failed a characteristic time (CT) test shed a light on the lack of oversight placed on the conformity of professional equipment.

While stewards of the game and gear heads alike have said that the tests could be seen as a turning point in how equipment regulations are applied and enforced on Tour, Bryson DeChambeau, one of the most eccentric equipment junkies on the PGA Tour, had some out-of-the-box ideas about how testing should take place on the Tour week-to-week.

“I think we should be tested after every win, or whoever finishes in the top 5 should be tested,” Dechambeau told Golf.com at the WGC-FedEx Invitational. “It’s like NASCAR.

“If you win with an illegal driver or something else that’s (non-conforming), I would say don’t take the tournament away, because how is the player supposed to know when he was given the driver in good faith. Maybe it did get hotter over the course of hitting it 500 times, or they have a different way of measuring. There’s a bunch of discrepancies in there.”

Spoke to Bryson DeChambeau about how to handle club testing going forward. A couple of his suggestion, including how to punish violators, are Nascar-esque. https://t.co/rVfIIGuAib

DeChambeau alluded to the fact that driver faces in particular can become fractionally hotter over the course of several center hits, which could take a driver that was designed and tested to fall within the legal limits to the edge or over the line.

Operating under the assumption that these hypothetical non-conforming drivers were not used in bad faith, DeChambeau said that the victory shouldn’t be taken away from them, but one of the perks of the victory could be curbed should they be tested and proven to have been using non-conforming equipment.

“If you did play a driver that was illegal, you take some FedEx Cup points away,” DeChambeau said. “So you make your money and win, that’s great, but you lose half the points you made. It’s not like you should have the trophy taken away. That’s one way to deal with it.

“You putted well, you chipped well. But I think there needs to be some repercussions from using something that’s not under the conformance rules. If they want to challenge the ruling, they can go do some tests to see if it was truly over.”

The PGA Tour has yet to comment on the R&A’s testing, nor have they revealed any plans in the works to test members’ equipment on a weekly basis.