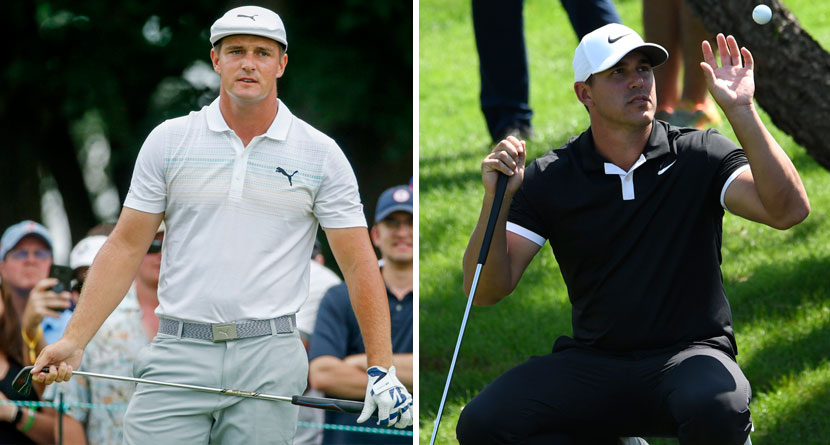 The first leg of the FedEx Cup Playoffs had as much drama take place off the course as on it. The Northern Trust was won by Patrick Reed on Sunday, but his first victory since last year’s Masters was overshadowed by one of the game’s most polarizing figures calling out one of its biggest stars.

Bryson DeChambeau came under fire for his pace of play, especially after two clips of DeChambeau made their way onto social media. With a lot of vitriol coming DeChambeau’s way, he took the offensive and confronted the caddie of Brooks Koepka, according to Golfweek.com’s Eamon Lynch.

“I was standing on the putting green with Koepka’s caddie earlier when an irritated Bryson DeChambeau walked up & told him to tell his boss to make any comment about slow play “to my face,” Lynch wrote. “Brooks arrived soon after, got the message & ambled over for a chat with the scientist.”

“I have no problem saying anything to anyone’s face,” Koepka told his caddie, Ricky Elliott, upon receiving the message. He then sought out DeChambeau and the two spoke about the issues, which both parties elaborated upon after the completion of their final rounds.

“I mentioned his name once,” Koepka said, referencing his comments about another viral video of DeChambeau from earlier this season. “I don’t think I’ve come at him. I just talked about slow play, and obviously, he feels I’m talking about him every time. It was fine. No issues.”

DeChambeau reiterated Koepka’s comments saying the two were able to clear the air.

“(Koepka) said a lot of things about slow play out in the public, and you guys have asked him that and he has the right to say things just as I do,” DeChambeau said. “I have heard him talk about slow play before and he has mentioned my name before, and I just wanted to clear the air. He’s got respect for me; I have respect for him. So, no issues.”

“Everyone out here (is) probably a little bit more afraid of confrontation than in other sports. I think you see that,” Koepka said. “There’s always been some confrontation on a team. Sometimes it helps and you figure out what the root of the problem is, and start working on it.”

It appears Koepka and others talking about slow play has done some to figure out the root of the problem as the PGA Tour has announced it will be reviewing its pace of play policy.

Previously, the policy only dealt with players or groups who have fallen out of position. The Tour is now “exploring whether to expand its policy to also address players whose groups are in position, but who take an excessive amount of time to hit a shot.”

“We know that the individual habits of players when they are preparing to hit a shot can quickly become a focal point in today’s world, and our players and fans are very passionate about this issue,” Tyler Dennis, the PGA Tour’s Chief of Operations, said in a statement. “We have leveraged our ShotLink technology to provide every player with a pace of play report that they can access which breaks down the varying parts of their game and gives feedback on the amount of time on average that the player takes to hit a particular shot.

“We are currently in the process of reviewing this aspect of pace of play and asking ourselves, ‘Is there a better way to do it?’ We think technology definitely plays a key role in all of this and we are thinking about new and innovative ways to use it to address these situations.”