DeChambeau: Koepka Would “Kick My Ass” In A Fight 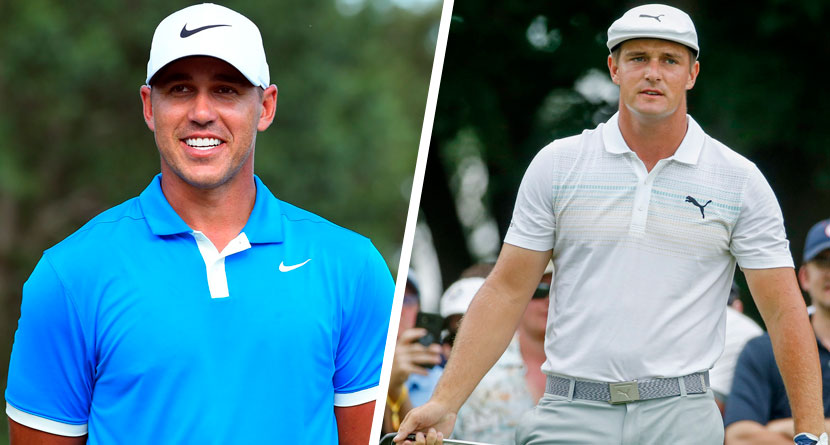 What started last week as perhaps the most relatable sports controversy golf has seen in a long time fizzled out by the end of the first week of the FedEx Cup Playoffs.

With Bryson DeChambeau on the defensive for his pace of play, the five-time PGA Tour winner went after the biggest and baddest guy in professional golf: Brooks Koepka.

According to Golfweek.com’s Eamon Lynch, an upset DeChambeau approached Koepka’s caddie, Ricky Elliott, on the putting green at Liberty National and told the looper that if his boss had something to say about DeChambeau’s pace of play, he should say it to his face and not to the media.

Not one to shy away from confrontation, Koepka went over and chatted with Bryson upon receiving the message, seemingly squashing any issue there may have been.

“I mentioned his name once,” Koepka said last Sunday. “I don’t think I’ve come at him. I just talked about slow play, and obviously, he feels I’m talking about him every time. It was fine. No issues.”

Putting an end to whatever pseudo-feud was going on, both Koepka and DeChambeau joined SiriusXM PGA Tour Radio’s “Out of Bounds” with hosts Michael Collins and Pat Perez.

“People acted like the two of y’all were going to fight,” Collins said.

“Let’s be honest, we know who would win that fight and it’s not me,” DeChambeau said. “Let me tell you right now, he’d kick my ass.”

ICYMI: Would @b_dechambeau and @BKoepka REALLY get in to a fight on the golf course over slow play? The guys caught up with @ESPNCaddie & Pat Perez. pic.twitter.com/rQPIhoWrdb

“He’s got that right,” Koepka chimed in.

With that hatchet buried, the two stars move onto the second leg of the playoffs this week at Medinah Country Club in Chicago. Koepka currently sits atop the points standings with DeChambeau in 20th place.