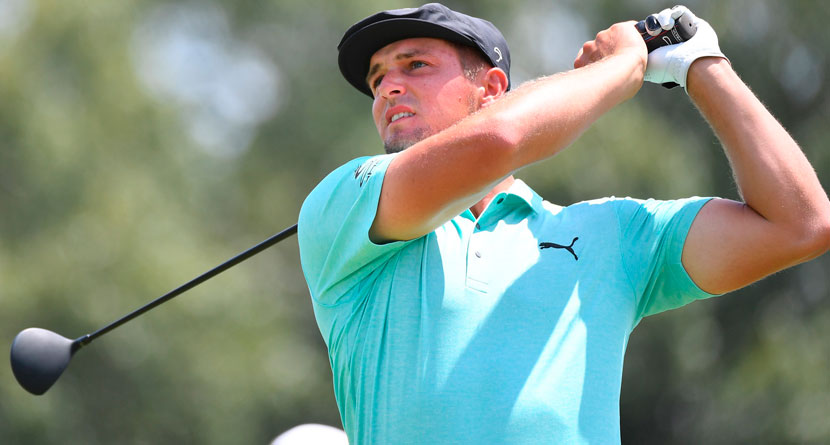 Bryson DeChambeau’s pace of play was once again called into question during the second round of The Northern Trust after a pair of clips of his round were shared on social media.

anyone need a nap?

here’s DeChambeau pacing off a 70-yard shot which took over 3 minutes to hit (couldn’t post the entire video it took so long) pic.twitter.com/7A3Azeftyu

The two clips in question — one a putt on the 8th hole and the other a pitch on the 16th — took over two minutes each, which caused announcers, fans and even fellow Tour pros to publicly go after DeChambeau.

“I’d love to see Bryson DeChambeau just play nine holes with his buddies, speed golf, couple of beers in tow, and see how he does without all the analytical stuff that goes into it. Could he do it?” a Golf Channel play-by-play announcer said, according to Golf.com.

“You need to be an aeronautical engineer to be his caddie,” another announcer said. “I mean this is tough for his playing partners, I’ve got to be honest, when you’re standing around waiting with all of this going on.”

The harshest criticism came from fellow Tour pro Eddie Pepperell who tweeted, “Just look at Tommy and Justin, both looking completely bored. Slow players do this to their playing partners making the game less enjoyable. Problem is, the unaffected single-minded twit in this instance, doesn’t care much for others.”

As the clips made the rounds over the next 24 hours, DeChambeau responded to the criticism following his third round on Saturday.

“Let’s talk about slow play, guys,” DeChambeau began. “It’s really kind of unfortunate the way it’s perceived because there’s a lot of other guys that take a lot of time,” DeChambeau said. “They don’t talk about this matter and for me personally, it is an attack and it is something that is not me whatsoever. People don’t realize the harm that they are doing to the individuals.”

“Let me give you one example, guys. Stevie Williams. I played with him at the WGC, right. Guess how long it took us to play that round, the third round? Does anyone know? Might want to go check that out. Because we were on their tail every single hole playing with Jason Day and Stevie. A lot of it’s the caddies.

“When people start talking to me about slow play and how I’m killing the game, I’m doing this and that to the game, that is complete and utter you-know-what. That’s not fair.”