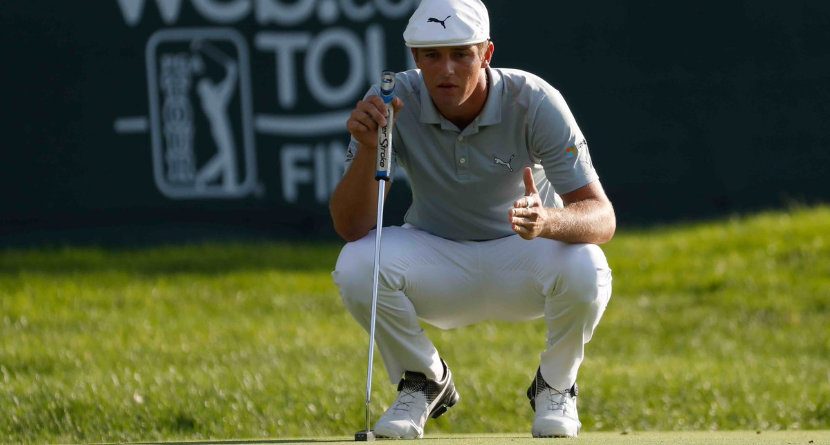 Bryson DeChambeau withdrew after 28-holes at this past week’s water logged Genesis Open at Riviera Country Club in Los Angeles citing a hand injury, however, some folks were none too pleased with that decision. The thing is that the PGA Tour rookie was playing on a sponsor’s exemption which meant he wouldn’t have even been at Riviera this week in the first place. Whether it was a hand injury or the fact that rain reeked havoc on play causing multiple suspensions making a Monday finish a real possibility, tour pro Grayson Murray expressed his opinion loud and clear on Twitter:

Like DeChambeau, Murray earned his PGA Tour card on the Web.com Tour by being the leading money earner in 2016. The only difference was that he wasn’t invited to play like Bryson was. Actually it’s been a rough few weeks for the Mad Scientist. First the USGA ruled that his side-saddle style putter was non-conforming, then he missed three straight cuts, and now this WD.

The Genesis Open forged on without a few players who also withdrew including defending champion Bubba Watson, but it was Dustin Johnson who was the last man standing to claim his 13th PGA Tour victory and earned him the top spot in the World Golf Ranking, overtaking Jason Day’s 47-week run. Johnson is the 20th different No. 1 since the formation of the rankings.

After the third round was suspended, Dustin came back firing on Sunday morning birding his final three holes to give him a six-stroke lead heading into the final round. He then self-admittedly was on “cruise control” the whole way home posting an even par 71. Even still his margin of victory was five. Belgium’s Thomas Pieters finished T-2 after a brilliant 63, along with American Scott Brown. Justin Rose, Kevin Na, and PGA Tour rookie Wesley Bryan.

Here are the highlights & final results of the 2017 Genesis Open: