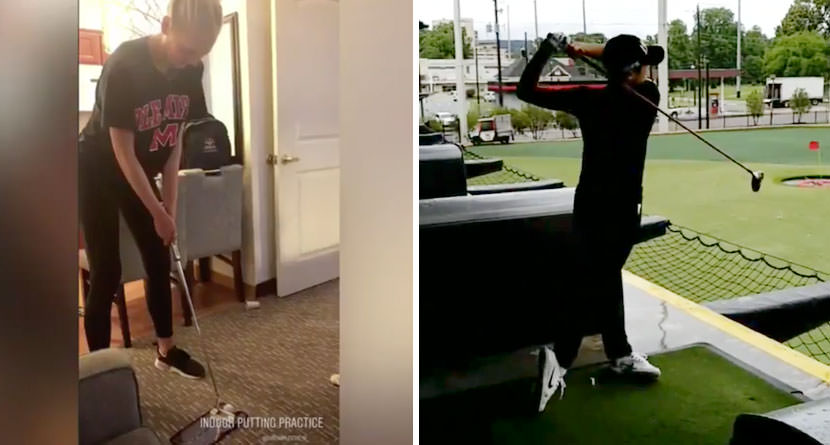 This week at Shoal Creek Golf and Country Club, host of the U.S. Women’s Open, has already been a strange one. Getting more than six inches of rain, which caused the course to close for practice rounds earlier in the week, players were forced to get creative with their major championship preparation.

While the range and practice areas eventually opened late Tuesday and Wednesday, defending champion Sung Hyun Park did not want to wait around for the USGA to allow players back on the property. Instead, she took matters into her own hands and headed to Birmingham Topgolf to work on her swing.

So with rain wiping everything out today @ShoalCreekAL #USWomensOpen I figure a visit to @Topgolf #Birmingham is in order. So I wind up beside defending #USWomensOpen champ Sung Hyun Park. So, yeah. pic.twitter.com/fXIIAAr9IQ


As luck would have it, Chris Stevenson, a writer for The Athletic Ottawa, was also looking for somewhere to hit some balls in the rain-soaked area and made his way to Topgolf as well and was given the bay next to the defending champion.

“That’s the last thing she needed to see, a Canadian’s pasty white legs and my hockey-like golf swing fresh in her mind before defending her championship,” Stevenson joked to GolfChannel.com’s Randall Mell. “People here and there were stopping to watch her. I would hit two balls and turn around and watch her hit two. I asked her if I could take a video. She was gracious enough to say yes.”

Park wasn’t the only player getting creative. Jessica Korda, already a winner on the LPGA Tour this year, retreated to her hotel room with her personal ball return to work on her putting game.

As for the rain-soaked course, players have made it known that they think lift, clean and place should be implemented, but the USGA stuck to its guns and will play the ball down.

Hell has not frozen over. The USGA’s record will remain perfect (in this area). Playing the ball as it lies today at the US Women’s Open: