Story Surfaces Of Mickelson Getting Stiffed $500,000 By Detroit Bookie 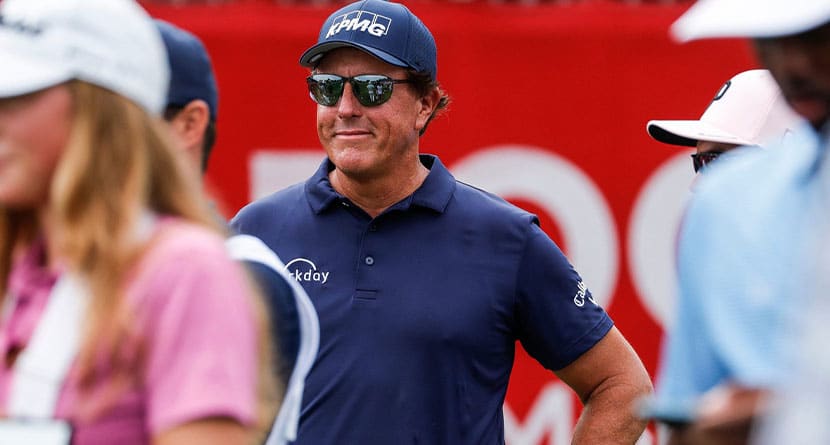 Making his first start at the Rocket Mortgage Classic this week in Detroit, the Phil Mickelson headline in the local paper the day before the event kicked off wasn’t one that the six-time major would have likely seen coming: Lefty and Dandy Don: How a Grosse Pointe bookie allegedly cheated Phil Mickelson.

In previously unreported trial transcripts from the 2007 racketeering trial of Jack Giacalone, a reputed organized crime leader in Metro Detroit, Mickelson was linked to “one of the biggest gamblers in Detroit history,” according to the story that appeared in The Detroit News on Wednesday.

“Dandy” Don DeSeranno, who also handled bets for big shots as a Las Vegas casino host and bookie from 1994-2002, was questioned about Mickelson after receiving immunity from federal prosecutors and testified as a government witness against Giacalone 14 years ago.

In an effort to paint DeSeranno as a crook to jurors, Giacalone’s lawyer, Neil Fink, asked about dealings with Mickelson, alleging that DeSeranno failed to pay Mickelson his winnings on a large wager.

“Did you cheat — do you know Phil Mickelson, the golfer?” Giacalone’s lawyer, Neil Fink, asked, according to the 2007 trial transcripts.

“I wouldn’t say I cheated him,” DeSeranno said.

“I couldn’t pay him,” DeSeranno said.

Although the trial happened in 2007, the transcript did not appear in Giacalone’s court file until 2018. Fink’s attempt at delegitimize DeSeranno worked as Giacalone was acquitted two days after DeSeranno took the stand.

The trial transcripts were found in May of 2021 as Giacalone faced prison time earlier this month in connection with an overdue tax bill of more than $537,222.

While Mickelson’s name was dragged into the fray and made for a juicy headline with the event taking place in Detroit this week, Mickelson was never accused or charged with any wrongdoing, according to former Assistant U.S. Attorney Keith Corbett.

“We never looked at him,” Corbett told The News. “I don’t know what the laws were in Vegas, but from a federal standpoint, it is not a crime to be a bettor.”

“Phil and a bunch of his buddies back then were betting on sports, and Phil was the guy placing the bets,” Mickelson’s lawyer, Glenn Cohen, told The News on Tuesday. “They got (DeSeranno’s) name and had no idea what his background was. The guy didn’t pay him, Phil says it was a significant amount. He never got paid, and that was it.”

When the story was published, the Mickelson camp, headed up by Cohen, slammed the paper for the timing and newsworthiness of the piece.

“He didn’t say anything [in the story] that wasn’t true; I’m not complaining about that,” Cohen said of the reporter, Robert Snell, in an interview with ESPN.com. “But why? Why are you going to embarrass Phil Mickelson when he’s there to support your tournament and the charities it supports and the Tour? Rocket Mortgage is a Detroit-based company. Phil has never played there before.

“I’m disappointed they would curiously pick this week to write an article about a bet that was made over 20 years ago and a jury trial that took place in 2007, where the guy who was convicted is dead and where the only purpose for this article is to embarrass Phil Mickelson.”

As Mickelson embarks on his first round on Thursday, Cohen said he would not be addressing the story.

“My client would have no earthly reason whatsoever to make any comment about this,” he said. “I’m making these comments on my own.”