DJ Forgot He Won His First Start After Major Win 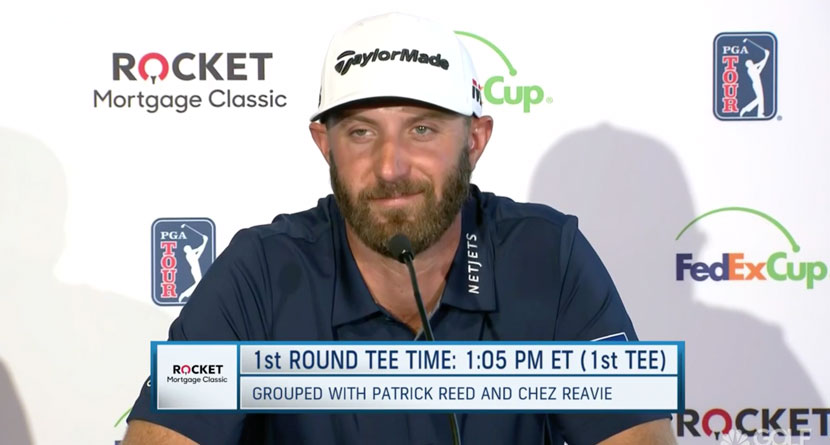 For most pros, each and every win on the PGA Tour is a potentially life-altering and career-defining achievement, but Dustin Johnson has never been accused of being “just another pro.”

Speaking to the media ahead of this week’s inaugural Rocket Mortgage Classic, Johnson was asked in reference to Gary Woodland teeing it up for the first time since winning a major how he responded the next week he played on Tour after winning his first and only major championship to date at the U.S. Open in 2016.

Having racked up 20 wins on the PGA Tour and possessing a decidedly laissez-faire attitude, Johnson smirked and responded that he truthfully couldn’t even remember his next start even though he won it.

“Honestly, I don’t even remember,” Johnson said. “It was Akron? And I won there? Awesome.

“I mean, that was a long time ago. And then Akron, it was before the Olympics so the schedule was all weird. That’s probably why I don’t remember.”

Johnson’s WGC-Bridgestone Invitational victory three years ago did have some extenuating circumstances surrounding it. The Rio Olympics jumbled up the PGA Tour schedule a bit, moving the Akron event to late June, but Johnson shot a pair of weekend rounds of 66 to win by a stroke over Scott Piercy.

Johnson is playing alongside last week’s winner, Chez Reavie, as well as Patrick Reed in the first two rounds of the Rocket Mortgage Classic. The pairing is slated to tee off at 1:05 p.m. ET on Thursday.