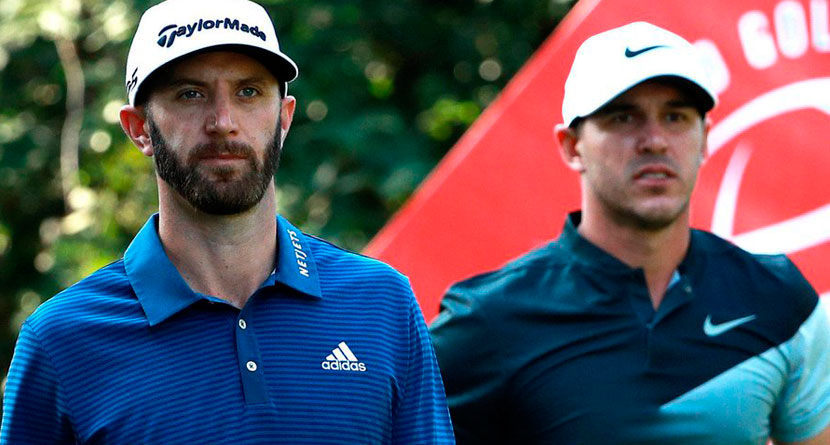 The ascension of Brooks Koepka to the top of the golf world has turned his friendship with former World No. 1 Dustin Johnson into constant storyline.

While Koepka had played the “little brother” role in recent years, his recent run of major success has shined a light on Johnson’s lack of results in the biggest moments.

As a result, a narrative of a schism between the two has developed in the media as Koepka has taken on the alpha dog role. Like many things, however, it appears the narrative has belied the truth of the situation. Both Koepka and Johnson live near one another in South Florida, have been regular training partners and hang out outside of the course, as evidenced by their significant others’ social media pages.

If further proof was needed that the pair of bombers are still in each other’s good graces, look no further than Koepka’s parking spot and locker at this week’s Tour Championship in Atlanta.

Ahead of Friday’s second round, Johnson — who teed off two hours ahead of Koepka thanks to an opening-round 3-over par 73 — had some fun with Koepka’s recently-released ESPN The Magazine Body Issue photos, printing out the picture and placing it over Koepka’s name in the East Lake parking lot as well as on the front of Koepka’s locker.

Johnson’s prank had its cover blown by those on the ground in Atlanta who snapped photos of the parking spot, allowing Koepka to see it before he arrived and ruining the surprise.

“We’re just laughing about it,” Koepka said. “I had two hours to laugh about it, and it’s not really that funny when you get here and the cameras are there. Like I’ve already laughed and joked about it.”

Johnson wasn’t the only one to have some laughs at Koepka’s expense. European Challenge Tour pro Marcus Armitage even did an homage of his own, although it likely won’t end up in print.

All the attention doesn’t seem to have negatively impacted Koepka. After back-to-back rounds of 67, Koepka erased the three-shot advantage Justin Thomas had over him to begin the week to lead by a stroke after 36 holes.