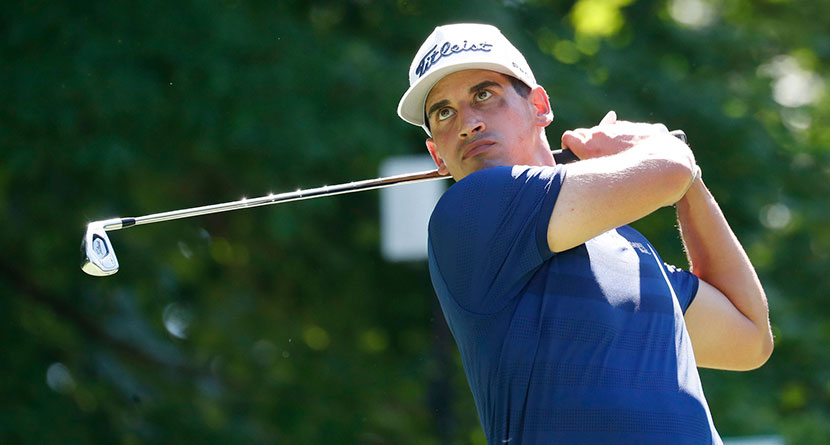 Dominic Bozzelli has had a rough go of things so far in 2020.

The fourth-year PGA Tour pro has missed two of his first three cuts of 2020 after a solid fall campaign that was highlighted by a T6 finish at the Sanderson Farms Championship in September.

Playing this week in the Puerto Rico Open opposite the WGC-Mexico Championship, Bozzelli got off to a good start playing the front nine of Grand Reserve Country Club in 2-under par before birdie his first two holes on the back nine to move into contention.

However, disaster struck and frustration boiled over on the par-4 12th.

Bozzelli missed the green on the 465-yard hole, leaving himself with what the announcers called “a pretty straight-forward” bunker shot. With some wind in his face and ample green to work with, Bozzelli knifed the ball out of the bunker and across the green.

@NoLayingUp @TronCarterNLU what’s better – the distance on the club toss, the “whoop whoop” sound of the club helicoptering through the air, or the no comment from the announcers? #toursauce #didtheballlandbeforetheclubwasintheair? pic.twitter.com/Xv49JMRHJ2

As the camera panned to locate the ball, Bozzelli’s club came to rest some 40 yards away near the cart path.

“That is just a major mistake,” the announcer commented, making no mention of the club throw.

Bozzelli would go on to make double-bogey on the hole en route to playing his final 7 holes in 3-over par to drop from what would have been a top-15 position heading into Friday down to tied for 52nd place, seven shots back of first-round leader Kyle Stanley.