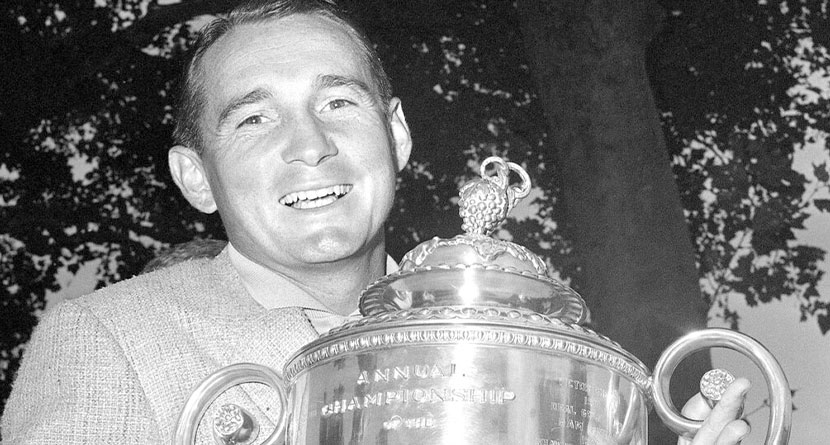 Dow Finsterwald became a footnote in history as the first player to win the PGA Championship in stroke play and the last U.S. captain of a Ryder Cup before continental Europe was invited to join.

More than a major champion and Ryder Cup player, he devoted his life to golf as the longtime professional at The Broadmoor in Colorado.

Finsterwald, a 12-time winner on the PGA Tour, died Friday night at his home in Colorado Springs, Colorado. He was 93. His son, Dow Finsterwald Jr., said he died peacefully in his sleep.

“He did all he could for the game,” said his son, the head professional at Colonial Country Club in Fort Worth, Texas. “He enjoyed his friends and they always remembered. He loved the rules and he cared about the game. He had a wonderful life and he felt like for sure it was complete.”

Finsterwald was born in Athens, Ohio, and played college golf at Ohio University. One of his earliest matches was against Arnold Palmer at Wake Forest, and they became best friends until Palmer’s death in 2016. Finsterwald spent his winters at Palmer’s Bay Hill Club and Lodge.

Sweet swinging Dow Finsterwald RIP.
1958 PGA Champion. Runner up to Arnie at the 1962 Masters. 11 PGA Tour wins and 4 Ryder Cup appearances. Ryder Cup Captain in 1977.
93 was a good round. pic.twitter.com/Celq8nUk6B

“He (shot) 29 the first round we played together, so I didn’t have much luck there,” Finsterwald once said.

Palmer came along as golf was being shown on television. That was a big reason why the PGA Championship decided to switch from match play to stroke play in 1958.

Finsterwald lost in the championship match in 1957 to Lionel Hebert. The following year at Llanerch Country Club in Pennsylvania, Finsterwald was two shots behind Sam Snead going into the final round when he closed with a 67 and won by two over Billy Casper.

“It certainly made a big impact on my life and certain things were made available because of winning that championship,” Finsterwald said at Oakland Hills in 2008 on the 50-year anniversary of his win. “But as important as it was to me — and believe me, it has been very important — it was a major step for the PGA of America to go from match play to stroke play.”

“It certainly was a little extra there in that I had been the runner-up in the finals of the last match play. So I guess I’m a little prejudiced about stroke play,” he said. “But it was the logical thing to do and the time to do it.”

Finsterwald was the PGA player of the year in 1958 and he won the Vardon Trophy for the lowest scoring average in 1957. He also played on four Ryder Cup teams, going 9-3-1. He was the captain of the 1977 U.S. team that featured Ryder Cup rookies like Tom Watson and Lanny Wadkins.

The U.S. won easily, and it was at that Ryder Cup at Royal Lytham & St. Annes that Jack Nicklaus suggested stronger competition because the Americans were winning with regularity. The Britain & Ireland team was then expanded to include continental Europe.

Finsterwald’s last win was the 500 Festival Open Invitation in Indianapolis. He also made 72 consecutive cuts, a remarkable feat from his era because it was not measured on a 36-hole cut but being among the top 25 or so finishers who were paid from the prize fund.

Finsterwald became the head pro at The Broadmoor in 1963 and kept the position for 28 years.