DP World Tour Pro Makes Ace, Gets Disqualified After The Round 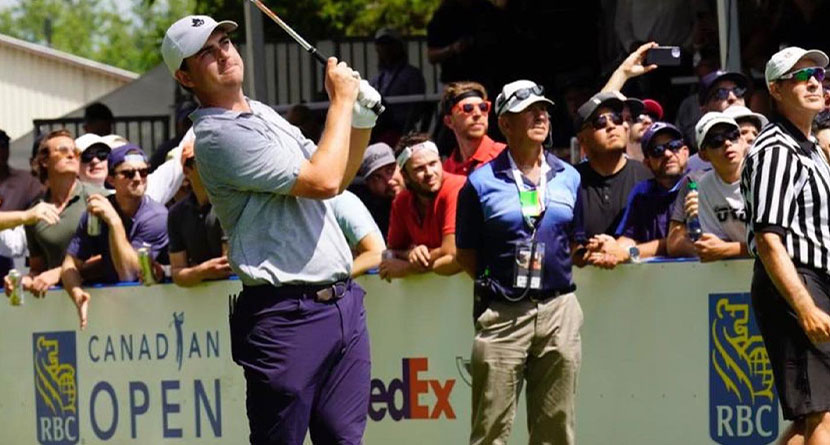 Canadian golfer Aaron Cockerill, 30, is fresh off of a seven-day stretch to remember.

The pride of Manitoba made a hole-in-one during the opening round of the European Masters, and he followed that with another ace in the first round of this past week’s Made in HimmerLand, the DP World Tour’s Danish event.

However, the cold water of a disqualification dashed the excitement raised by the second ace in as many weeks after Cockerill forgot to sign his scorecard.

Can confirm 2 aces in 7 days is pretty cool, although I didn’t exactly ‘validate’ it on the next .. ☃️ And with some hole in one chatter in the recording area I forgot to sign my card and got DQ’d 🤣 #haveaday

Cockerill explained in a Twitter reply that he got caught up chatting about his second ace in as many weeks in the scoring area and failed to sign for his 4-over par 75.

With the cut falling at 3-under par after two rounds, Cockerill’s DQ may seem trivial, yet the incident does raise a larger issue: how important are scorecard signatures today?

Scores on the PGA Tour are recorded by the ShotLink system. But that system is, as Shane Ryan reported a year ago for Golf Digest, unavailable in Europe, which does not have the “hundreds of volunteers” needed to make ShotLink work in the United States.

Still, as Ryan pointed out, a group called the 15th Club has implemented a similar system for the DP World (nee European) Tour, employing professional caddies to log “shot-by-shot information after rounds” by their players.

So while the PGA Tour’s European counterpart does not have ShotLink, it does have an electronic means of keeping track of all shots hit during a given tournament — and presumably, at some point will implement something similar to ShotLink. When that point comes, having golfers sign their scorecards after rounds will become an anachronism, if it hasn’t already.

And that then invites the question: why must golfers sign their scorecards? The most famous incident regarding a bad signing remains Roberto de Vincenzo’s fiasco at the Masters in 1968 when the Argentine infamously signed for the wrong score and opened the door for Bob Goalby to claim the green jacket.

But while the signing ritual might have made sense a generation ago, it makes less sense today.

In those days and earlier, after all, golf had to work on an honor system: other than playing partners and what few fans happened to be around, the scores of all but the very top players were recorded solely by the competitors themselves.

In that sense, demanding that players commit to putting a signature to scores made certain sense. The signing ritual – and it is most certainly a kind of rite — connected golf to other forms of oathtaking that existed in the pre-modern world.

Yet, just as baseball has turned away from treating its umpires as kings or even gods — a pitch “ain’t nothin’ till I call it,” legendary umpire Bill Klem once said — towards a computerized system that locates every pitch in the major leagues, professional golf is moving towards a system that will record every shot by every player.

In those circumstances, what is the place of a signing ceremony after the round?

Traditionalists will respond by saying, as they always do, that signing is part of the game as it has always been played. And it is true that it has been part of the way the professional game has evolved over the past century and more. But then again, Tiger Woods doesn’t play gutta-percha or use a niblick.

Is signing a scorecard destined to follow hickory shafts? Someday, Aaron Cockerill may become the answer to a trivia question: who was the last man to be disqualified for signing an incorrect scorecard?