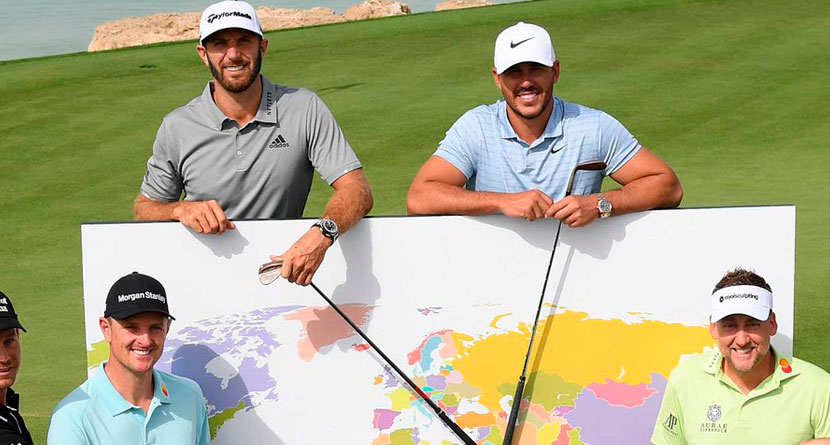 Despite the backlash that came out of last year’s Saudi International, two of the game’s top three-ranked players announced that they will be teeing it up at Royal Greens Golf & Country Club at the end of January once again.

According to a report in The National, both defending champion Dustin Johnson and current World No. 1 Brooks Koepka will be in King Abdullah Economic City to play in the second-year European Tour event.

“I really enjoyed my trip to Saudi Arabia last year and my game certainly suited the layout at Royal Greens Golf & Country Club,” Johnson said in a release. “I have very good memories from the week and look forward to defending my title.

“It’s great to see how Golf Saudi has strengthened its commitment to create a world-class golf event and plans to grow golf in the region are in full swing. It’s an honor to be a part of it.”

“I’m excited to be returning to Saudi Arabia, after an enjoyable visit last year,” Koepka said. “The golf course is one of the best I’ve played in the region, with incredible scenery, including some breathtaking views of the Red Sea.

“The event is an opportunity to showcase the work being done to grow the game of golf in the Kingdom, which was evidenced by the enthusiastic fans last year. It is great to be involved with the initiative and I look forward to seeing the progress Golf Saudi has made in the past year.”

Of course, Saudi Arabia’s current regime and past human rights records have caused many to question the moral consequences that come along with participating in an event such as the Saudi International.

Last year, Golf Channel analyst Brandel Chamblee was one of the more outspoken dissidents to the cash grab the game’s top players participated in as part of their appearance fees in Saudi Arabia.

“A more definitive personal rebuke can be shown to the P.R. stunt of this regime, which is really just trying to hoodwink the West, by not participating, by refusing to participate,” Chamblee said. “Your participation in some way enriches this regime. And by nonparticipation of the athletes, in general, you can in some marginal way — and I applaud Paul Casey (for skipping the event) — make a statement about human rights.

“Whether the European Tour knows it, and whether the players know it, by participating, they are ventriloquists for this abhorrent, reprehensible regime.”

While Casey and Tiger Woods have both turned down large sums of money to play in Saudi Arabia last year, the likes of Johnson, Koepka, Justin Rose, Ian Poulter, Bryson DeChambeau, Patrick Reed and Sergio Garcia took part although the tournament was the site of Garcia’s much-discussed disqualification.