DJ Changes Opinion on Rolling Back the Golf Ball 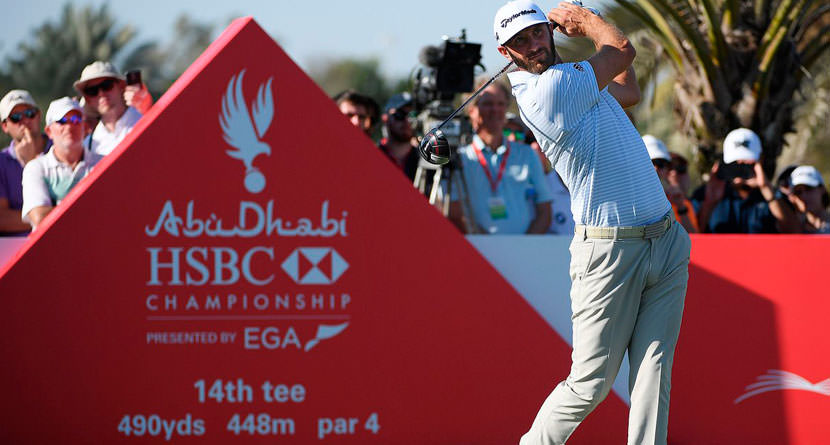 If 2017 was the year that the dam broke on the golf ball distance debate, 2018 has already proven that the conversation will continue, albeit without one of biggest names in professional golf on the side of those wishing to reign back the ball.

It Was Fun While We Had Him: DJ Pivots On Distance Regulation https://t.co/Z7PzaovqG7

Dustin Johnson, who seemed to initially support a rollback of the golf ball in late 2017, changed his tune earlier this week in Abu Dhabi.

Will Gray of GolfChannel.com had DJ’s comments along with some context.

“It’s not like we are dominating golf courses,” Johnson said. “When was the last time you saw someone make the game too easy? I don’t really understand what all the debate is about because it doesn’t matter how far it goes; it is about getting it in the hole.”

Johnson’s rhetorical question might be answered simply by looking back at his performance at the Sentry Tournament of Champions earlier this month, an eight-shot romp that featured a tee shot on the 433-yard 12th hole that bounded down a slope to within inches of the hole.

Johnson appeared much more willing to consider a reduced-distance ball option at the Hero World Challenge in November, when he sat next to tournament host Tiger Woods and supported Woods’ notion that the ball should be addressed.

“I don’t mind seeing every other professional sport, they play with one ball. All the pros play with the same ball,” Johnson said. “In baseball, the guys that are bigger and stronger, they can hit a baseball a lot further than the smaller guys. … I think there should be some kind of an advantage for guys who work on hitting it far and getting that speed that’s needed, so having a ball, like the same ball that everyone plays, there’s going to be, you’re going to have more of an advantage.”

Speaking Wednesday in Abu Dhabi, Johnson stood by the notion that regardless of whether the rules change or stay the same, he plans to have a leg up on the competition.

“If the ball is limited then it is going to limit everyone,” he said. “I’m still going to hit it that much further than I guess the average Tour player.”