DJ Gets Choked Up In Emotional Interview After Winning Masters 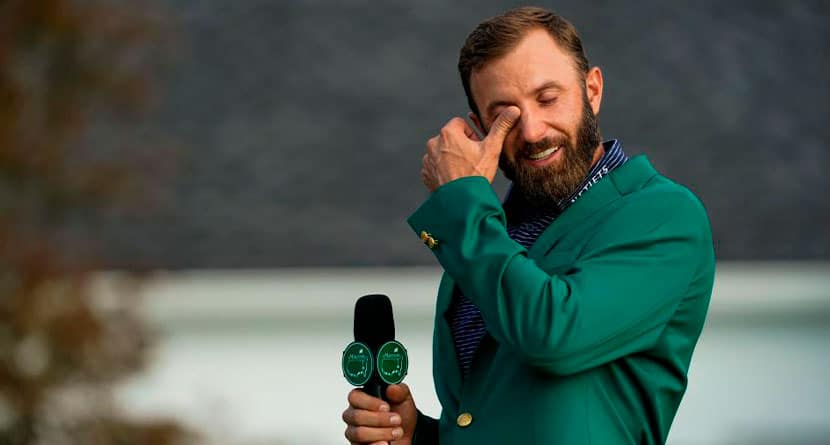 On the course, Dustin Johnson is the picture of cool, calm and collected, rarely showing any sort of emotion, good or bad.

After he had the green jacket slipped onto him by Tiger Woods on Sunady, however, just how much he cares couldn’t help but spill out during his interview with CBS’ Amanda Ballionis.

Often criticized — and occasionally lauded — for his stoicism, Johnson showed fans just how much he cares as he attempted to put into words what it meant to him to win the tournament that he grew up dreaming of winning.

“It’s a dream come true,” Johnson said. “As a kid, I always dreamed about being a Masters champion.

Winning the Masters is a dream come true for Dustin Johnson. pic.twitter.com/2gGJ9HuMSJ

Asked to give viewers a peek behind the curtain, Johnson again got choked up and couldn’t finish his thought.

Balionis wrapped up the interview as Johnson embraced his family, and host Jim Nantz put into perspective what the world just witnessed.

“I think that’s one of the greatest things I’ve ever seen from Dustin Johnson, right there,” Nantz said. “You get so many people that question what’s inside players’ hearts. So easy these days to post a thought or a comment on some site or social media. And people feel good about themselves for trying to tear down these talented people who work so hard and the fire that’s inside of him, you just saw it right there. That was just a reflection on just how much it meant, how hard he worked for it.”

Given some time to compose himself, Johnson spoke in his post-round press conference about the emotion he showed at the green jacket ceremony.

“On the golf course, I’m pretty good at controlling my emotions, because I’m out playing golf,” Johnson said. “I had a tough time there speaking with Amanda on the putting green, just because it means so much to me. It means so much to my family, Paulina, the kids. They know it’s something that I’ve always been dreaming about and it’s why I work so hard.

“I put in a lot of work off the golf course, on the golf course. I think it’s just something that you push yourself for, that’s why I work so hard, to be in this position and to finally have the dream come true, I think that’s why you see all that emotion.”