DJ, JT Feel Like They’ve Underachieved In Their Careers 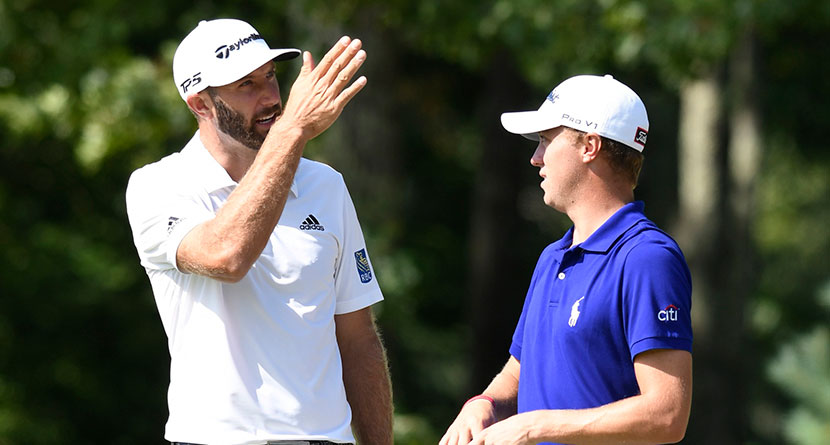 The New Year is a time for new beginnings, reflecting on the year that was and preparing for the one on the horizon.

For PGA Tour pros who won last year, their season gets underway this week in Hawaii at the Sentry Tournament of Champions where some of the biggest names in the game are looking to get their 2020 off to a good start.

Two of the biggest names in the event were in reflective moods when they arrived at the Plantation Course at Kapalua to meet with the press ahead of Thursday’s first round. Justin Thomas and Dustin Johnson both copped to believing they haven’t lived up to their potential in the game despite having combined to win more than 30 times on the PGA Tour.


“I’m disappointed I haven’t achieved more to be honest until this far,” Thomas said on Tuesday. “I shouldn’t say disappointed, but I mean, I’m pleased with my career thus far, but I feel like I could have and should have won a lot more tournaments and definitely should have contended and won some more majors. So that’s just my opinion.”

On Wednesday, Johnson took a similar tone when asked about his ability to win on Tour each of the 12 years he’s been out there.

“I expect to win, but I don’t take it for granted just because it’s so difficult to win out here,” he said. “The guys out here, they’re so good, and any week, anybody that’s in the field can win the tournament if they play really good. You know, you never take it for granted because you don’t win that much. If you think about the amount of times you play, so winning is still special, and it’s always going to be special to me.”

Happy New Year! One of my favorite holes at Kapalua! I really like the changes to the course and my new gear this year. @TaylorMadeGolf @adidasGolf pic.twitter.com/FS7J2MWKZN

Reminded that he’s won 20 times, DJ had a simple answer: that’s not enough.

“I’m proud that I have 20 wins out here because it’s very difficult to win, but yeah, I definitely feel like I should have more,” he said. “Probably about double.”

As GolfChannel.com’s Brentley Romine pointed out, DJ’s winning percentage is around 8% on the PGA Tour, which is among the best in the sport.

Where the two see similar weaknesses is in the four biggest tournaments of the year. Both have one major championship to their credit, but feel that they should perform better on the biggest stages.

“I know what I’m capable of, and I know what it takes to win out here,” Johnson said. “You know, for me a successful year would be just obviously winning three, four times and then competing in all the majors, just putting myself in a position to win golf tournaments every week, really.”

“The goals usually aren’t too difficult (to guess),” Thomas said. “You could get four or five people together in here and you guys could probably come up with a decent amount of them. It’s not anything crazy as you see every year, but to me it’s just stuff that I think is going to result in a great year, or things that I need to do, whether it’s on the course or off the course to succeed.