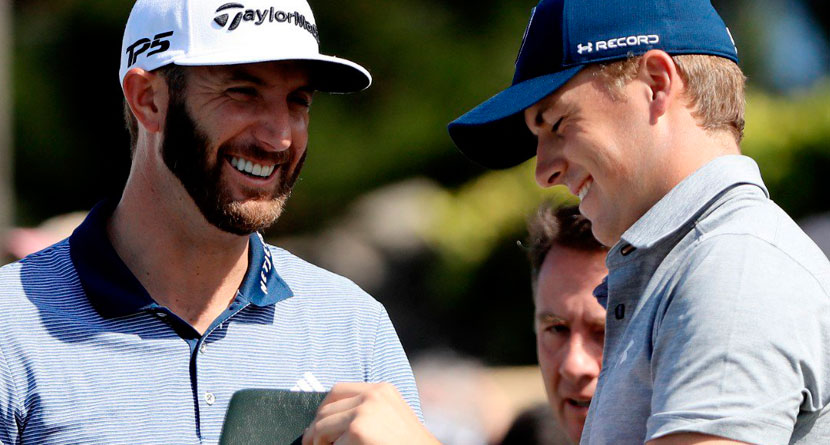 When it comes to major championships and Dustin Johnson, controversy seems to never be far behind. Whether it playing grounding his club in a bunker at Whistling Straits, falling down stairs at the Masters or the rules controversy that threatened to derail his victory at last year’s U.S. Open, there’s never a dull moment with DJ.

This year’s renewal of America’s national championship again brings DJ headlines, although this one has a happy ending, at least for Jordan Spieth. Paired together in the first two rounds, Johnson got himself in another rules situation on Friday at Erin Hills. Kevin Cunningham of Golf.com had the bizarre details.

During the second round on Friday, Johnson hit his drive on the par-5 7th hole wide right into fescue, just a few yards from playing partner Jordan Spieth’s own drive. But when Johnson arrived to search for his ball, he accidentally touched Jordan’s ball with his foot.

A rules official was called in, and no penalty was assessed, in accordance with Rule 18-4 which states, “if a fellow-competitor, his caddie or his equipment moves the player’s ball, touches it or causes it to move, there is no penalty. If the ball is moved, it must be replaced.” Since Johnson could not determine exactly where the original spot was, Spieth was given a free drop as is required by Rule 20-3c, which states, “if it is impossible to determine the spot where the ball is to be placed or replaced, the ball must be dropped as near as possible to the place where it lay but not in a hazard or on a putting green.”

Spieth ended up making birdie on the hole to move to one under for the tournament, while Johnson made par.

Only one of two top players involved will be around for the weekend as Spieth fired a 1-under par 71 to move to even par for the tournament. Johnson, the No. 1-ranked player in the world, joined Nos. 2 and 3 Rory McIlroy and Jason Day in exiting Erin Hills are two rounds. DJ shot 75-73 to miss the cut by three strokes, while McIlroy shot 78-71 to miss the weekend by four strokes. Day’s rounds of 79-75 left him at 10-over par, well out of range of the 1-over par cut line.

As the U.S. Open prepares to crown its 2017 champion, there are four guys tied atop the leaderboard — Brooks Koepka, Paul Casey, Tommy Fleetwood and Brian Harman — with first-round leader Rickie Fowler among those one shot back.

Here are some highlights from Friday at Erin Hills.

Recapping the top moments from the second round of the 117th #USOpen. pic.twitter.com/OO78s7LXry