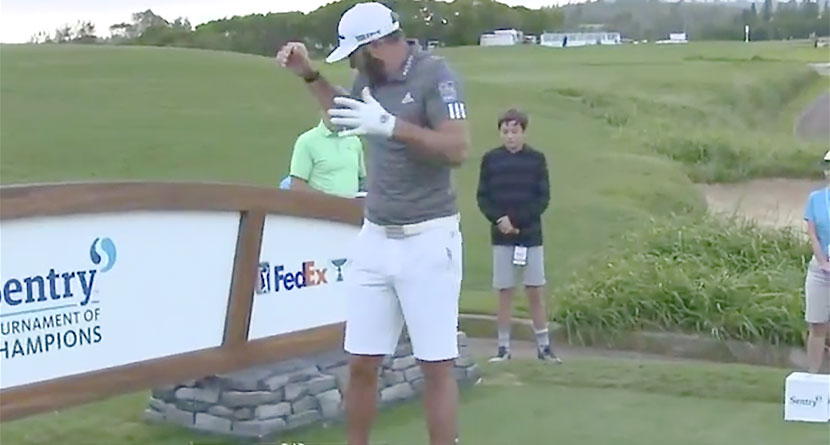 Dustin Johnson has won the Sentry Tournament of Champions, the annual winners-only, no-cut event that kicks off the PGA Tour’s calendar year, twice in his career, so he’s no stranger to the settings and setup of the Plantation Course at Kapalua.

However, beings that this is the first start of a new year, DJ made waves earlier in the week by posting a cryptic video that appeared to show the 20-time PGA Tour winner swinging a new club — the unreleased TaylorMade SIM Max driver.

While Kapalua is a normal site for unveiling new equipment, not much was known about TaylorMade’s new line coming into the week, so DJ’s eagerness to not only put the driver in play, but also a 3-wood and rescue club, was big news for gearheads.

First one he’s ever tried that doesn’t go left. Would be first hybrid he’s ever used in whole career (including juniors).

“I’m playing Max. I’ve got the Max driver and 3-wood, and I’m actually going to play a rescue club which I never thought that would happen,” Johnson told PGATour.com on Wednesday. “I’ve been hitting it the last few days. I hit it quite nicely. I don’t know, we’ll give it a run for a little while, see how it works.”

Later on Wednesday, however, Johnson was almost forced into abandoning his new driver after he smacked the new club into a Sentry tee box sign.

Knocking some of the rust off. pic.twitter.com/nNxCtXr0zo

Both Johnson and the new club appeared to emerge from the embarrassing incident unscathed, but his first competitive round with the new big stick left something to be desired.

DJ missed six fairways and ranked 31st out of 32 players in strokes gained: off the tee, a statistic that he led the Tour in 2018 and was fourth on the circuit last year. To add insult to injury, three of those missed fairways also missed the golf course, finding penalty areas.

Dustin Johnson looking like he came right out of “Field of Dreams.” ??? pic.twitter.com/SCuj6SNF5P

Despite the low points of the round, Johnson also made an eagle and five birdies to offset seven pars, four bogeys and a double bogey and post a 1-under par score of 72 to enter the second round six shots back of the first-round leader Joaquin Niemann.