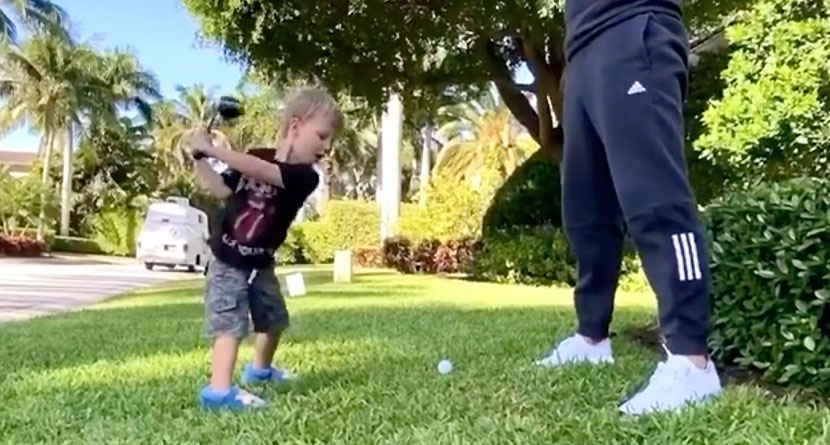 The offspring of a former World No. 1 golfer and the daughter of the greatest hockey player of all time not only has nothing to worry about financially for the rest of his life, but he’s also pretty likely to possess some of the most athletic genes in history.

Case in point: the video River’s mom shared of him and his dad ahead of the Thanksgiving holiday. DJ and RJ appear to be in the front yard teeing up drivers and bombing them down the street.

Gretzky captioned the photo “Watch out PGA Tour 2035.” With a swing like that smooth and lineage that strong, who’s going to doubt him?

Another cool perk of being River Johnson is the equipment he can get his hands on. As Golf.com’s James Colgan pointed out, River is swinging a cut-down TaylorMade M5 driver, and it looks like his dad has another model in his hand.

The big loser in all of this? Your ego knowing that there’s a 2-year-old out there with a better swing than you and that utility van on the street that appears to be directly in River’s line of fire.

As for River’s dad, DJ is prepping to play competitively next week for the first time since the Tour Championship at the Hero World Challenge. He underwent arthroscopic knee surgery after the 2018-19 PGA Tour season finale and hasn’t teed it up in a tournament event since.

“I know even after a long layoff what it takes to be ready in tournament shape,” Johnson told GolfChannel.com’s Tim Rosaforte of his long layoff. “Obviously simulating tournament rounds is very difficult. Stuff like this helps, though. I know it’s pretty relaxed, but you still can put a little pressure on yourself. You’ve got to make some putts so it definitely helps.”

Johnson will play in next week’s Hero World Challenge and then head to Australia on the Presidents Cup team charter plane for the biennial matches at Royal Melbourne Golf Club.