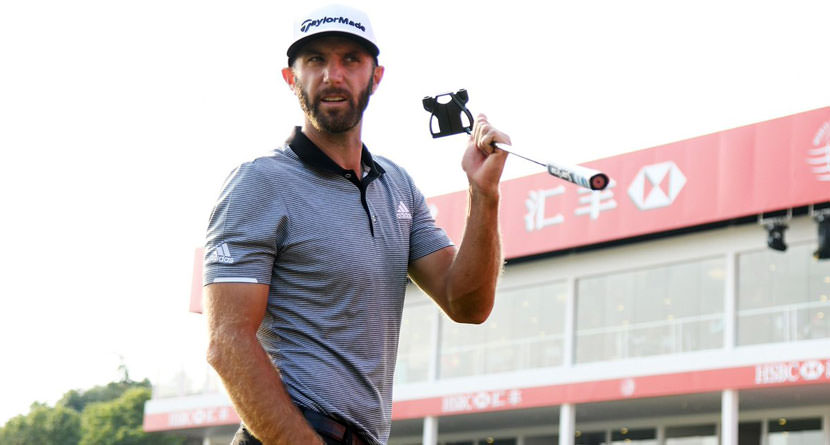 Dustin Johnson has never been accused of being the most intellectual player, and that’s being written in the most complimentary way possible. The entire “DJ is a dolt” narrative may be convenient for those who want to discredit a man who has won seven times in the last 16 months, but the fact remains that whatever level Johnson’s brain waves are acting upon seems to be perfect for him.

A case in point of his mental acuity came this weekend at the WGC HSBC Champions in Shanghai. Following a ho-hum first-round 4-under par 68, Johnson wasn’t happy with where his putting was, so he enlisted the help of a TaylorMade’s Asian Tour rep to get him a last-minute equipment change that would lead to a second-round 63.

Dustin Johnson added a new putter to his bag 20 minutes before teeing off. Proceeded to shoot a 63… pic.twitter.com/5LEXpTEoCX

Dustin Johnson has been known to wait until the last minute to make a decision on his putter. Just last year at the BMW Championship, the top-ranked player in the world tested a TaylorMade Spider Red putter during the early portion of the week, only to swap the mallet for his brother Austin’s Spider Tour Black as he prepared to tee off on Thursday.

Johnson went on to win that week. History could soon repeat itself in China after Johnson once again waited until just before his Friday tee time to make a putter change at the WGC-HSBC Champions.

Unhappy with his performance on Thursday with a TaylorMade TP Collection Berwick, Johnson decided to shake things up 20 minutes prior to the second round and go with a TaylorMade Spider Tour mallet — the same putter Johson used for most of the 2016-17 TOUR season to notch four TOUR wins and reach the top spot in the Official World Golf Ranking.

Most weeks, a putter change requires a trip over to the equipment truck to get a new wand. But with the request coming after the trucks had departed Sheshan International, Patrick Tang, TaylorMade’s Asian Tour rep, had to get creative.

According to a TaylorMade representative, Tang located a Spider Tour head with a sightline early Friday morning — Johnson’s usual mallet doesn’t have a sightline on the crown — and filled the line with black paint to give it the appearance of a clean black crown.

From there, Tang bent the putter to Johnson’s preferred specs — 69-degree lie angle with 3 degrees of loft — added a SuperStroke Pistol GT 1.0 grip and had it ready to go right before Johnson walked to the first tee.

“I wasn’t really pleased with the one I played with yesterday, so the guys here in China made me one,” Johnson said. “I got it right before I walked to the tee. I hit a few putts on the practice green with it and I was like, ‘Oh, this will work pretty well.’ Went out and holed a lot of putts today, so kind of like it.”

Johnson went on to shoot a second-round 63 to grab a one-shot lead at the halfway point of the tournament.

DJ backed up his low round with another 68, which was the low round of the day on Saturday as well. He holds a six-shot lead over Brooks Koepka heading into Sunday’s final round.