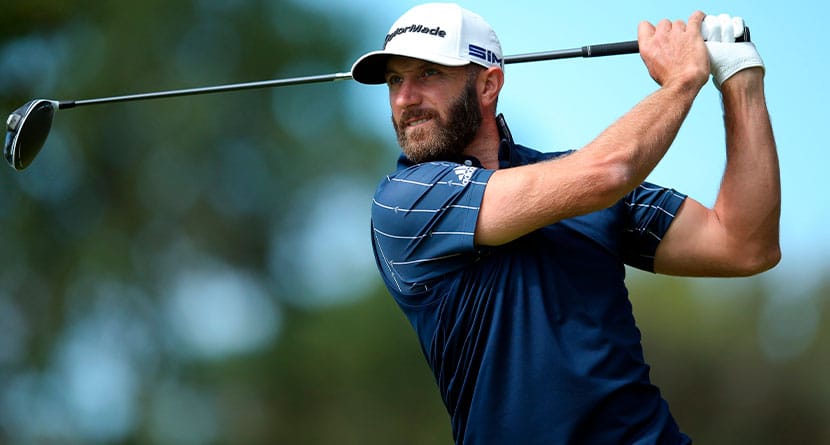 Dustin Johnson is in the midst of playing some of the best golf of his life, but he’ll be out at least this week at the CJ Cup at Shadow Creek and could put next week’s Zozo Championship in doubt at Sherwood Country Club, where Johnson is a member and holds the course record.

According to a PGA Tour release, Johnson was experiencing symptoms after arriving in Las Vegas on Sunday for a week of prep work for his first start since the U.S. Open.

Johnson’s agent, David Winkle, told ESPN.com DJ took the normal on-site test on Sunday as part of the PGA Tour’s testing protocol, which came back negative. Beginning to feel some symptoms on Monday, Johnson stayed away from the course over the next two days and a positive test on Tuesday afternoon confirmed the game’s top-ranked player had contracted COVID-19.

“He was really, really looking forward to these two weeks,” Winkle told News 3 Las Vegas. “But then he started experiencing symptoms later that night. He took it easy on Monday and thought maybe he was coming down with a cold. He had a little chest congestion. He went back and was tested (Tuesday) morning.”

Dustin Johnson has withdrawn from THE CJ CUP @ SHADOW CREEK after testing positive for COVID-19. https://t.co/KgwhWvW8xJ

“Obviously, I am very disappointed,” Johnson said. “I was really looking forward to competing this week but will do everything I can to return as quickly as possible. I have already had a few calls with the Tour’s medical team and appreciate all the support and guidance they have given me.”

With Johnson’s symptoms beginning early in the week, there is a possibility that he could tee it up next week near one of his home bases in Thousand Oaks, California. Wayne and Janet Gretzky, the parents of Johnson’s fiancée, Paulina, live nearby Sherwood Country Club.

Under the protocols on the PGA Tour, which are based on guidance from the Centers for Disease Control and Prevention, Johnson is supposed to self-isolate for 10 days dating to when he first experienced symptoms and can return if there are no other symptoms.

Johnson was slated to play the next two weeks as well as the Houston Open the week prior to next month’s Masters, which begins on Nov. 12.