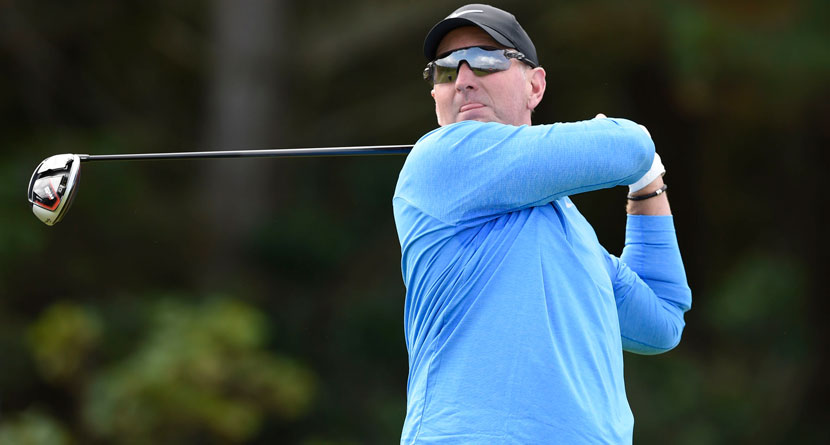 David Duval is most recently expected to show up on a television screen in a suit and tie as an analyst, but as a former Open Champion under the age of 60, he has earned the right to tee it up in the world’s oldest major every year.

Coming into this year’s edition, Duval was bullish about his game having played in four PGA Tour events this year and a Korn Ferry Tour event last week, but Royal Portrush proved to be vexing for the former world No. 1.

Duval started his round with back-to-back birdies on the first two holes in his first round, but things went south in a hurry beginning with the par-4 fifth hole. The short, drivable par-4 proved to be more risk than reward for Duval as he carded a quadruple-bogey eight on the hole. Unfortunately for him, the worst was yet to come.

Two holes later on the par-5 seventh, Duval hit a wayward drive, a provisional and a second provisional. When he couldn’t find his original drive or his first provisional, Duval played what he believed to be his second provisional. As it turned out, the Titleist 2 he hit wasn’t his, meaning he had to return to the tee to hit a fourth tee shot plus a two-stroke penalty for playing the wrong ball.

The number of golf terms you’ll find in a glossary is quite long.

“I get up to the front of the green, I discover it was the wrong No. 2 Titleist,” he said. “I am at fault, I didn’t check it myself close enough. It happened to me once before — a marshal is standing right next to the ball. It’s just my mistake.”

What was originally deemed a 13 was later adjusted to be a nonuple-bogey 14, which led to a 13-over par outgoing nine of 49.

This description of David Duval’s 14 (changed from a 13 after his round) is wild. Hope the extra shot doesn’t cost him making the cut! pic.twitter.com/aF9pVVxT5c

Duval would fire a 7-over par 42 on the back nine to post a 20-over par 91. After the round, Duval faced the music and had a commendable reaction what proved to be a tough day.

“It’s fairly unsettling, obviously,” he said. “I came in here with some fairly high hopes. I had some good practice, and I played in the Korn Ferry last week in Colorado and my scores were good, I drove the ball like I used to drive the ball and everything was there.

“As a professional, if you play, you post your score. Is there some hint of embarrassment to it? I don’t know, but I teed off and what I shot at the end of the day, put it on the board.”