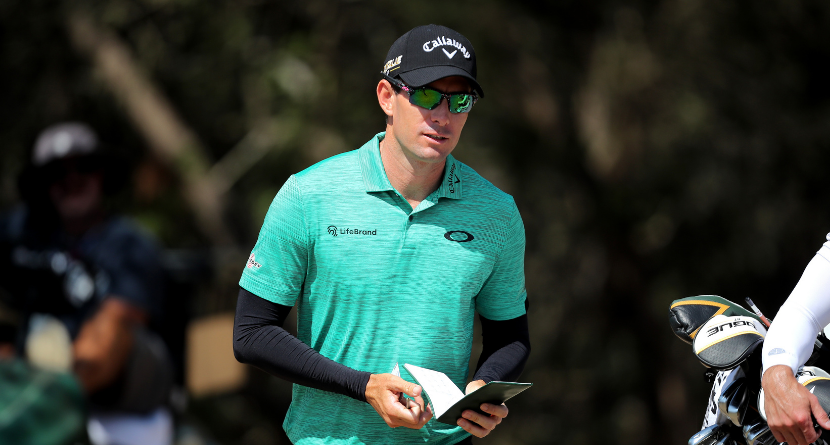 In golf, as in life, rules can ruin all the fun. Such was the case on Sunday at the RBC Heritage, where South African pro Dylan Frittelli used an artful escape from an airborne lie to set up a would-be par save — until the rulebook intervened.

As you’ll see in the video below — and words hardly do the shot justice — Frittelli takes an overhand chop at his ball as it gently sways from a mossy tree branch. He gave a little wave as the gallery roared its approval, then proceeded to knock his approach to 10 feet and drain the putt.


Soon after, a rules official caught up with Frittelli and informed him that he’d been assessed a two-stroke penalty for violating Rule 10.1c: making a stroke while standing across or on line of play. In essence, because Frittelli stood directly behind the ball, rather than moving to the side of it, his pass was deemed improper.

Frittelli, who recently embarked on a side hustle as a TV analyst, had a witty reaction on Twitter to what he says would have been “the greatest par of my life.”

Dylan Frittelli was assessed a two-stroke penalty on No. 6 under Rule 10.1c (making stroke while standing across or on line of play).

“The rules of golf remain undefeated,” Frittelli wrote in a post that featured an alternate angle of the shot. “SportsCenter Top 10 maybe?”

I thought this would be the greatest Par of my life 😲 I was assessed a 2-stroke penalty for “standing astride” my intended line of play during this shot. The rules of golf remain undefeated ✌🏼 🙄@SportsCenter top 10 play maybe? pic.twitter.com/KvnIIsXuQ9

Frittelli, 31, won his lone Tour event at the 2019 John Deere Classic to go with four additional professional victories. A former college teammate of Jordan Spieth at the University of Texas, he helped the Longhorns capture the 2012 NCAA championship before turning pro that summer.

In March Frittelli debuted as on-course analyst during coverage of the WGC Match Play, which proved to be an appropriate use of his goofy sense of humor.