Pepperell DQ’d From Event After Running Out Of Balls 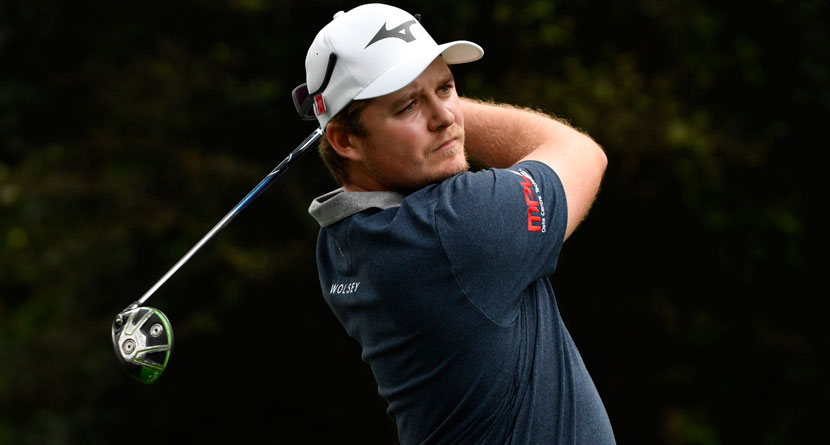 English Tour pro Eddie Pepperell is best known for his affable personality, dry humor and his ability to get a golf ball into the hole quickly.

However, we found out this week at the European Tour’s Turkish Airlines Open that Pepperell is just as likely as anyone to lose it on the golf course.

After shooting rounds of 70-72, Pepperell found himself 10 shots back of the 36-hole lead. Teeing off the back nine on Saturday, Pepperell made the turn and was playing the par-5 4th hole at the Montgomerie Maxx Royal course when he began pumping balls into the greenside pond reminiscent of the scene from Tin Cup.

Running out of golf balls, Pepperell notified his playing partners and walked off the course, disqualified for “failure to complete a hole.”

“I have never seen anything like that before. I only watched it on television.”

Eddie Pepperell walked off the course after running out of golf balls at the Turkish Airlines Open on Saturday: https://t.co/ly8J8zLHm0 pic.twitter.com/H3cAVRy1It

“Eddie hit his shots to the green, then came over to tell us he had run out of balls,” his playing partner, Martin Kaymer, told reporters in Turkey. “Then he walked off. I thought he lost four or five. We are about 80 percent sure it was five, 20 percent four. He was quick, so it was hard to keep track. He did not ask if he could borrow one from me or George (Coetzee).

“It did not look like he wanted to play. He did not putt with his putter on the third hole; he putted with a wedge. So there was a lot happening. I have never seen anything like that before. I’ve only watched it on television, in ‘Tin Cup.’ This is the first time I have seen it live.”

When reached for comment by GolfDigest.com’s John Huggan, Pepperell responded by saying there was “nothing to add really.”

In typical Pepperell fashion, the next day he responded to a European Tour tweet showing eventual champion Tyrrell Hatton reaching the par-5 green.

Pepperell’s DQ didn’t hurt his chances to play this coming week in the Nedbank Challenge in South Africa where the top-60 in the Race to Dubai standings are eligible. He currently sits in 48th place.