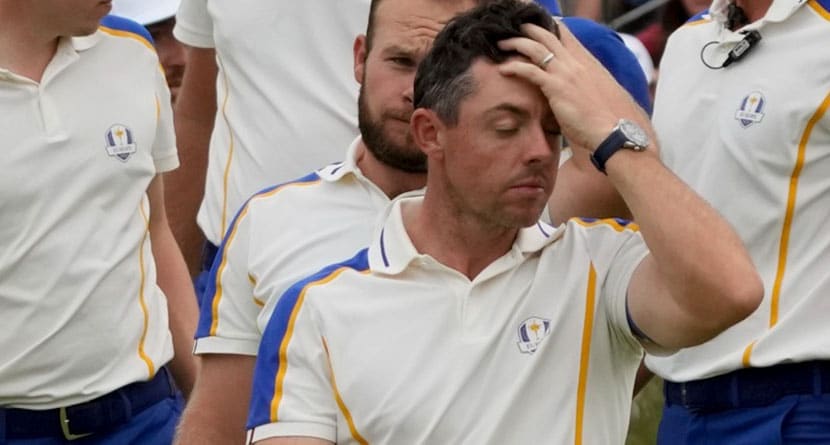 The “passion” of the players in the Ryder Cup is something that comes up every year that the biennial matches are played, but considering what we witnessed this week at Whistling Straits, there should at least be a moratorium on that narrative.

On both sides of the outcome, the intensity of the event — both on and off the course — was evident from the first tee to the final press conference. However, perhaps one of the lasting memories of the 2020 Ryder Cup, which was played in 2021, was the back-t0-back interviews Rory McIlroy gave after securing his lone point of the competition.

Following a sound 3 & 2 defeat of Xander Schauffele on Sunday, McIlroy spoke to Sky Sports and NBC in consecutive interviews, having trouble keeping his emotions in check for either.

“I love being a part of this team; I love my teammates so much,” McIlroy said, fighting back tears. “I should have done more for them this week. I’m glad I put a point on the board for Europe today, but I just can’t wait to get another shot at this. It is by far the best experience in golf.”

McIlroy, who went 1-3-0 at Whistling Straits, then repeated his feelings to NBC moments later.

“I don’t think that there’s any greater privilege than being a part of one of these teams, European or American,” he said.”I’ve never cried or got emotional over what I’ve done as an individual; I couldn’t give a sh-t. I’ve gotten to do this six times. They have always been my greatest experiences of my career.

“This team, and what it feels like to be a part of, to see Sergio (Garcia) break records (for Ryder Cup wins and points), to see Jon Rahm come into his own this week, to see one of my best friends, Shane Lowry, make his Ryder Cup debut… It’s phenomenal and I’m so happy to be a part of it. As I said, I’m disappointed that I didn’t contribute more this week, but you know, in two years’ time, we’ll go again and try to give it another go.”

The 2020 Ryder Cup will be one to largely forget for McIlroy, who, before his singles victory, sat out a session, went 0-2 in a single day and made just a single birdie over two days of four-ball competition.

McIlroy’s career record in the event fell to 12-12-4 over six appearances. Should he make the team in 2023 in Italy, McIlroy will be 34 years old.