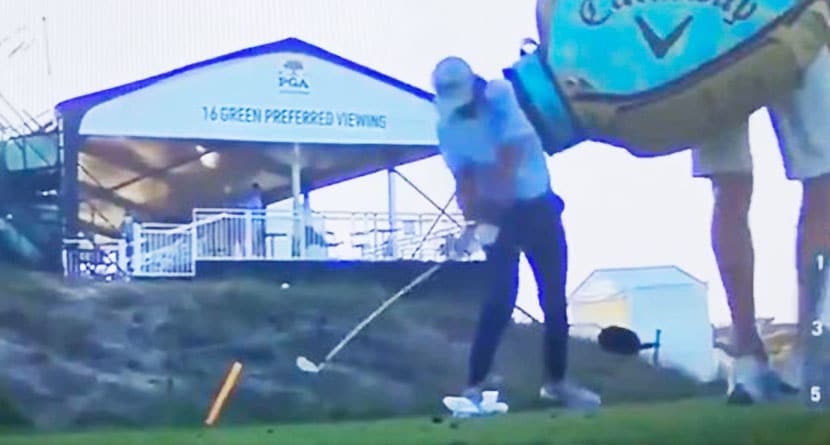 Major championship golf can bring out the best and worst from the top golfers on the planet, and this past weekend at the PGA Championship, fans saw both.

While Phil Mickelson will be remembered for his historic victory at Kiawah Island, fan discussion on the periphery of the event centered around the devilish nature of Pete and Alice Dye’s Ocean Course.

Stretching out to over 7,800 yards with a course rating and slope of 79.1/155, there’s plenty of trouble lurking on every hole of the par-72 layout. That kind of unrelenting difficulty proved enough to send a few of the sport’s best players past their wit’s end.

The first big display of frustration came on Friday afternoon when South Africa’s Erik van Rooyen was playing the 223-yard par-3 17th hole. The Dye-abolical design required the pros to play completely over water to a green that runs away from a right-handed player.

Entering the gauntlet at 6-over par for his second round and coming off a stretch of bogey-double bogey-bogey, van Rooyen’s tee ball toed the edge of the penalty area, momentary riding the railroad ties before falling into the hazard. Upon seeing his fate, van Rooyen let loose a few angry swings at a nearby tee marker.

Erik Van Rooyen finds the water then decides to obliterate a tee marker, losing a club head in the process.👀 pic.twitter.com/xRiizg0wl1

His first swipe appeared to send some debris towards a nearby volunteer, while his second swipe nearly caught his playing partner’s caddie. Ultimately, the tee marker headed into the penalty area fronting the tee, followed by the head of his 5-iron. He would go on to make triple-bogey 6 and miss the cut by four strokes.

On Saturday, the notoriously short-tempered Jon Rahm let his frustrations get the best of him on the par-3 5th hole. Missing his tee shot left, Rahm broke a microphone left of the tee box.

After posting an even-par round of 72, Rahm hadn’t completely cooled off when he met with the media. He took one question: “In your estimation on the golf course, does this open things up for the leaders to score a little bit this afternoon?”

“I don’t know and I don’t care, to be honest,” he answered. “I hit the ball tee to green as well as I could have for the most part and barely made any putts. And yeah, I’m not really happy, and to be honest, being in 40th place and finishing bogey-bogey like that, I really don’t want to be here right now.”

And with that, he stormed off. To his credit, he apologized the following day after firing a 4-under par 68 that resulted in a top-10 finish.

Lastly, on Sunday, Wyndham Clark found himself short-sided on the third hole, facing a tricky uphill chip that would require all of his skill. After failing to reach the putting surface on consecutive tries, Clark took out his frustrations on his golf bag.

Clark would make a double-bogey 6 on his way to a 5-over par 77 that dropped him 24 spots down the leaderboard into a tie for 75th place.