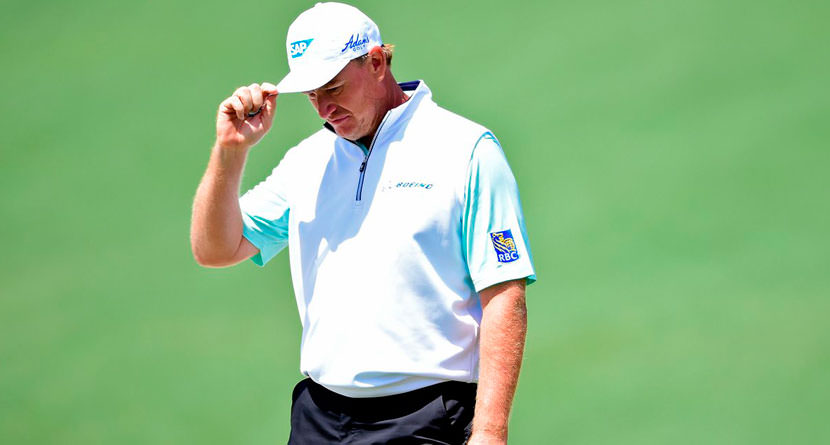 They say that the best gifts in life are free, and that adage is most definitely true as it pertains to Ernie Els’ 2017 holiday season. The 48-year-old South African received a special gift from the folks at Augusta National: a special invitation to the 2018 Masters.

Thank you for a Great Xmas present! @TheMasters Can’t wait!

Els played in his 23rd Masters in 2017 and even went so far as to rent an extra house to celebrate with family and friends what could have been his last trip down Magnolia Lane as a competitor.

Golfweek.com’s Brentley Romine had more information and a confirmation from Els’ team about the exemption.

Looks like 2017 won’t be Ernie Els’ final Masters after all.

The 48-year-old South African tweeted Sunday that he had received a Christmas gift from the Masters. Of course, while Els didn’t specify, he likely was referring to a special exemption for the 2018 tournament at Augusta National.

And Golfweek has learned, per Els’ management, that Els has indeed been given a special exemption for 2018.

The Masters has yet to officially add Els to its field for next year.

Els is a four-time major winner, though he has yet to win the Masters. He has six top-10s, including two runner-up finishes, in 23 career starts at Augusta National. He finished 53rd last year.

UPDATE (Tuesday, 12/26 4:00 p.m. EST): According to a report from the Associated Press, as well as a clarification from Els himself, it turns out Els’ invitation from Augusta National wasn’t as inclusive as previously thought.

Here’s what Doug Ferguson of The Associated Press confirmed with Augusta National.

Els had to clarify a tweet from Sunday that said: “Thank you for a Great Xmas present! @TheMasters Can’t wait!” That led several media sites to post stories that Els, a four-time major champion, had received a special exemption into the Masters.

Wanted to clarify my excitement getting an invite from @TheMasters. Work continues to qualify to compete!

Instead, the 48-year-old South African received a letter welcoming him as an honorary invitee. His five-year exemption into the Masters from winning the 2012 British Open ended last year. Augusta National has a tradition of inviting past major champions as honorary guests for the week.

Els tweeted Monday : “Wanted to clarify my excitement getting an invite from @TheMasters. Work continues to qualify to compete!

Augusta National occasionally awards exemptions to international players, but those typically are given to players who are not full PGA Tour members and have multiple avenues to qualify on their own. Among ways for PGA Tour members to qualify for the Masters are winning tournaments that offer full FedEx Cup points, reaching the Tour Championship or getting into the top 50 in the world ranking at various cutoff points.

“The inclusion of Honorary Invitees has been a great tradition at the Masters Tournament for many years,” Augusta National chairman Fred Ridley said. “This coming year the list includes Ernie Els, and we are once again excited to welcome him and all of these distinguished guests to Augusta National in April.”

The Masters pays homage to major champions more than any of the other majors by giving them special access as honorary invitees that includes two clubhouse badges, a $1,000 honorarium and a gift to commemorate them being there.

Honorary invitees used to be able to play practice rounds and compete in the Par 3 Tournament, a practice that ended last year.